Age of Wonders: Planetfall is an extensive turn-based strategy in which the main goal of the player is to develop a controlled colony. This, of course, requires resources. There are 5 of them - Energy, Knowledge, Production, Food, and Cosmite. In this section, you will learn what they are used for and how to obtain them. 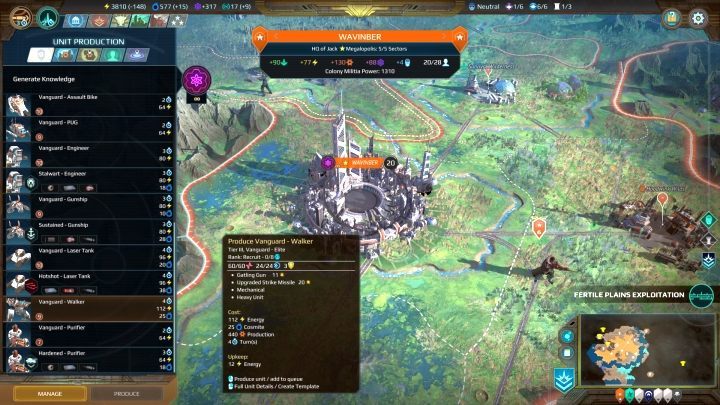 Energy is used for almost any action in the game.

Energy is a resource used for almost any action in the game. You need it to build all units and buildings. It is also used as material to maintain units, activate operations as well as modify units. Energy is produced by all the colonies and it is added to the total pool - when you perform a specific action, the required amount of Energy is taken from that pool.

Note - you can use energy once per turn to immediately stop all production inside a colony. This is useful when you have a large supply of energy and/or the immediate completion of production is important to you, however, do not overuse this mechanic, as you can quickly use all the energy of the colony. 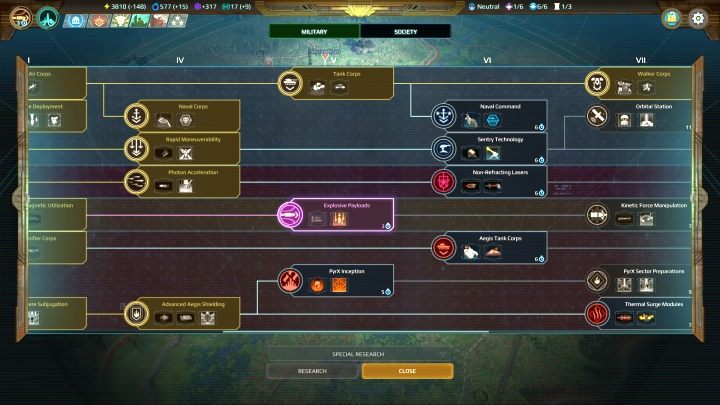 The number of received knowledge affects the duration of the research by reducing the time required.

Knowledge is a resource used for technological development - creating new technologies and unlocking new units and buildings. This resource doesn't accumulate - you get it on a regular basis from all colonies and use for the current research. Knowledge is generated mainly from the registered sectors on which the scientific institutions were built. 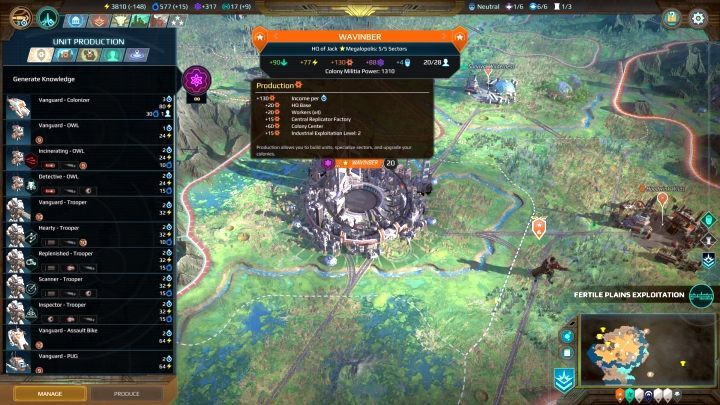 Production determines how long a unit or building will be produced.

Production is one of the resources that is separate for each colony - each colony produces it for its own needs. Moreover, this resource doesn't accumulate - you use it to recruit units or place buildings. The number of production resource simply determines how long it will take a given colony to produce something.

Note - productions can be deleted or changed while they are still in the process. In the first case, the points will be lost. In the second, the current production is stopped and resumed from the same place once the new process is complete. 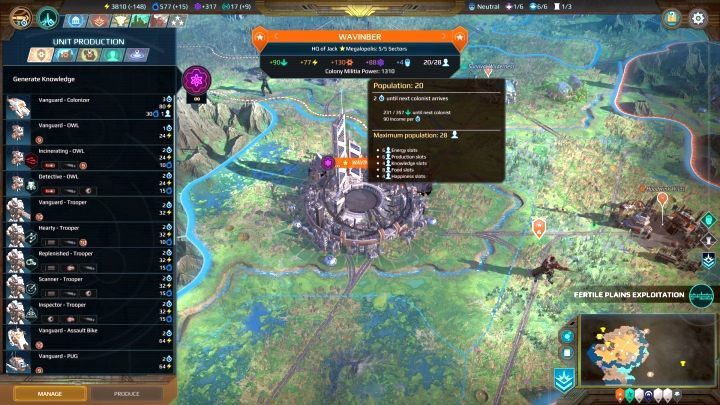 Food is directly related to the population of the colonies.

Food is another resource that accumulates separately for each colony. Food causes the growth of the colony - a population of colonists, and the number of territories that will serve under it. This, in turn, affects the general strength and production of a given colony - the more developed it is, the faster and more it will be able to produce.

Food affects the rate of getting new colonists. You can check this by selecting a colony - this is the last icon (depicting a person) in the window that has the name and number of generated resources by a colony. When you hover over it, you will get information about the number of colonists currently living in the colony and the amount of food you need to produce to get a new colonist. Once you gather enough food, a new colonist will appear in the colony. The whole process of getting resources begins anew and will keep repeating until you get 28 colonists.

Note - if the colony produces less food than it can consume, it will starve. With each turn, the negative food ratio will increase, and when it comes to -10, one colonist will leave the colony. The whole process will keep repeating until the food production returns to normal. 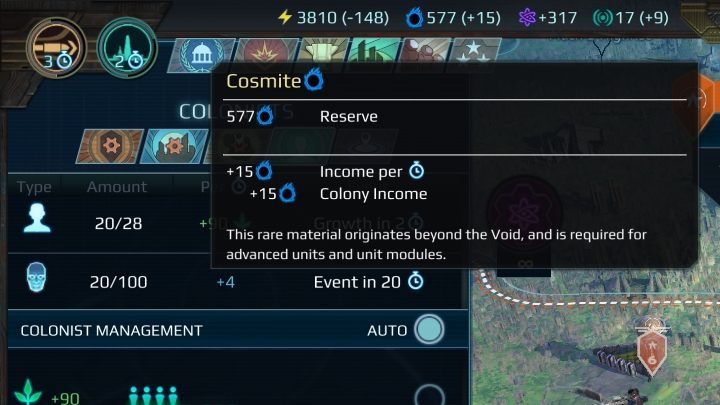 The amount of produced resources (Cosmite in this case) can be seen at the top of the screen.

Cosmite is the last and the rarest resource in the game. You use this resource to produce new units and modify them. It is also used to maintain Tier IV units. Production of this resource is made mainly through special deposits of this material scattered throughout the map.

Below you can find a few tips related to obtaining and using resources: