This Age of Empires 4 guide page provides a walkthrough for The Siege of Rochester mission in The Normans campaign. Using our tips you'll be able to quickly expand the village of Chatham and prepare your army for conquest. We provide tips on how to cut the enemy off from resources and how to destroy Rochester Castle. 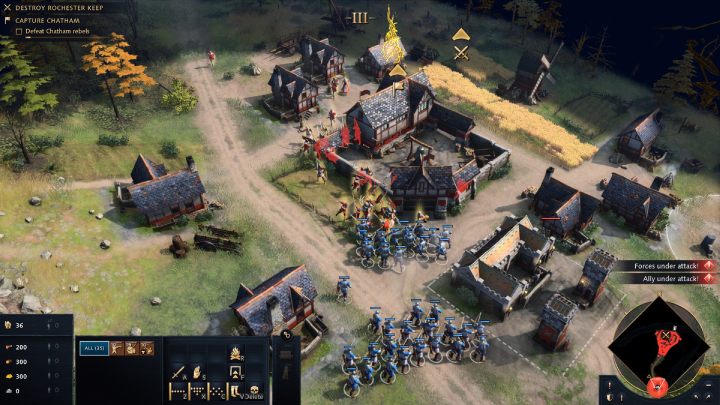 The mission begins after defeating the rebels and retaking the village. Once you've killed all the enemies, hire the locals to collect resources. Send out your Scout to do recon and gather sheep from the nearby forests.

Build a Mining Camp next to one of the gold mines and start gathering gold. 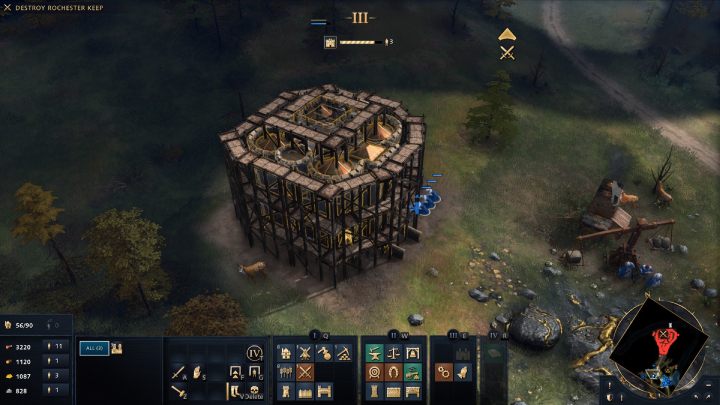 Your workers should quickly collect a large amount of resources. Build a Landmark to move on to the next age.

Make sure to build all of the military buildings and a Monastery. The Siege Workshop lets you create siege machines necessary to complete the mission. 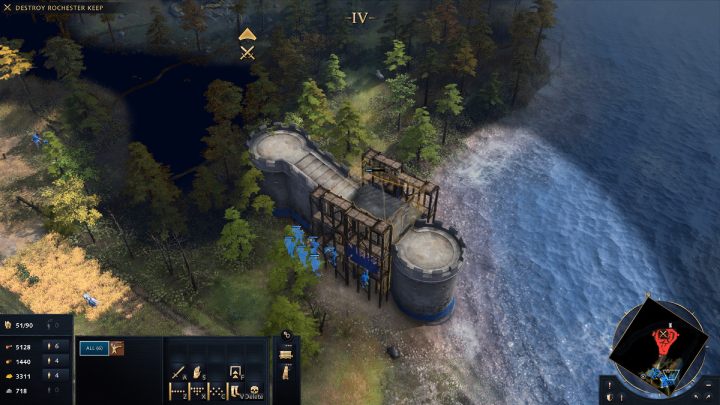 To repel the enemy's constant assaults build some walls or send out squads of soldiers to patrol nearby roads and forest paths.

Buy all the military upgrades and hire more units. Use the Siege Workshop to create several siege machines and get ready to conquer Rochester.

The Trebuchet is a siege machine with incredible range and power. It's perfect for destroying gates and fortifications when positioned far away from enemy archers. 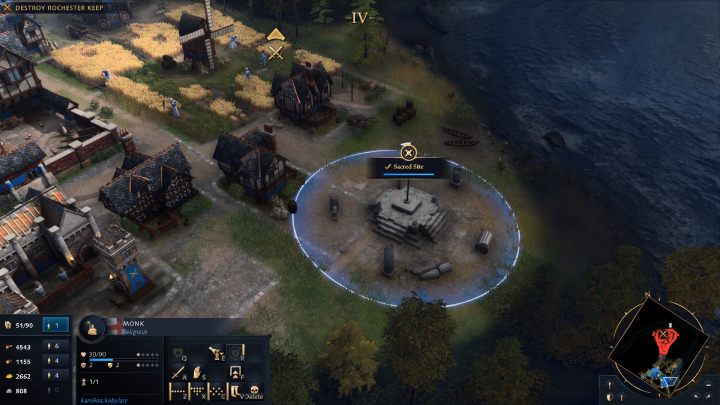 There's a Sacred Site in the village. Send a Monk there to take it over, securing a steady gold gain.

Sacred Sites are incredibly valuable. You should always protect them with a squad of your troops preventing the enemy to get their hands on them.

Look for more Sacred Sites in the area and secure them. 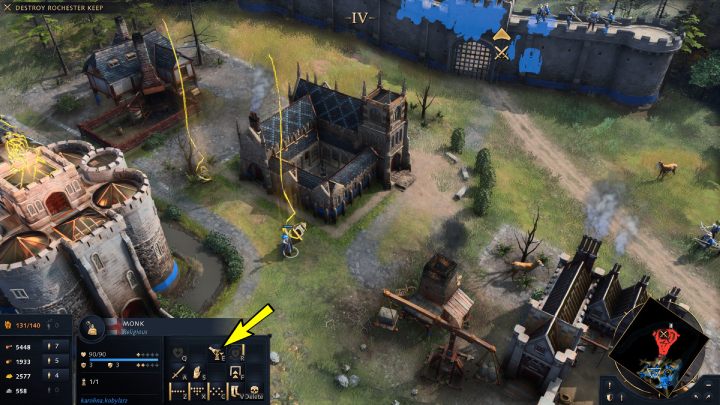 You'll eventually find a Relic. Relics can only be picked up by Monks. Take the Relic to the nearest Monastery to generate more gold. 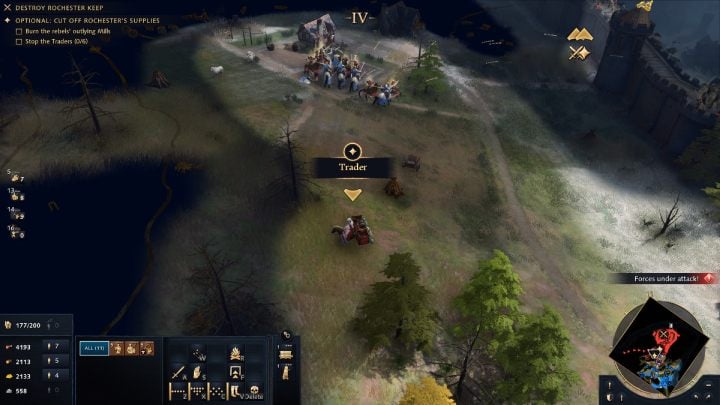 Once you've gathered some troops, head for Rochester. Defeating the soldiers underneath the city walls will reward you with new mission objectives which will pop up in the upper left corner of the screen.

You must eliminate 6 Traders heading for the nearby market. You can see their icons and their trails on the mini-map. You'll find more Sacred Sites on the way, take them over to cut off the enemy's access to gold.

Don't forget to leave a large squad in front of Rochester, your city can still be frequently raided. 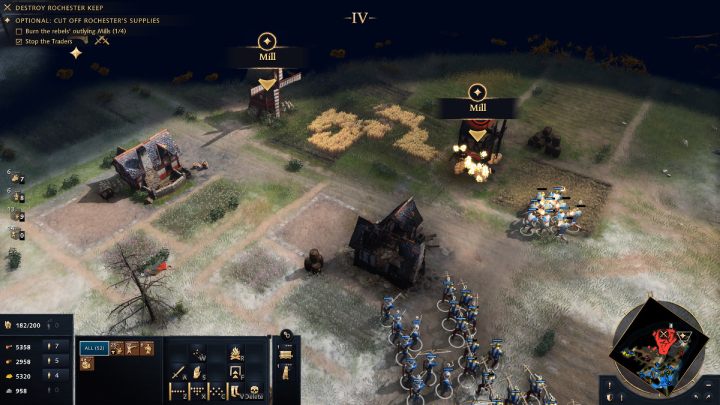 Burn down 4 Mills in the eastern area of the map. Once you cut off the enemy from food, the rebels should leave Rochester. This will weaken the enemy army. 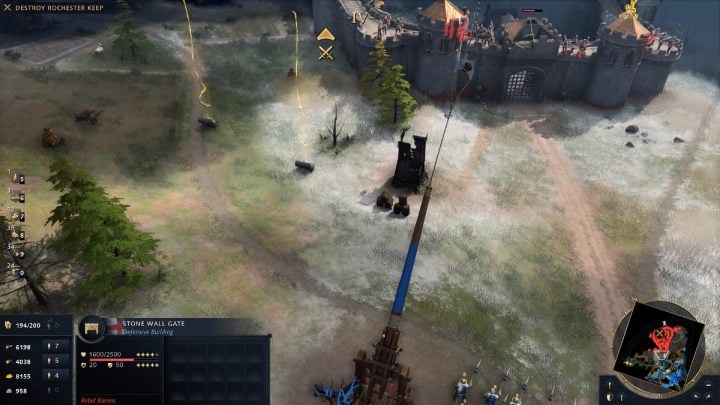 Get ready to lay siege to the keep. Your army should consist of at least 30 ranged units and 30 infantry. Keep producing new units and send them to the city walls.

To start the siege you must destroy the gate. Do it with machines such as Trebuchets and Battering Rams. Use Siege Towers to quickly climb up be city walls and eliminate the archers. 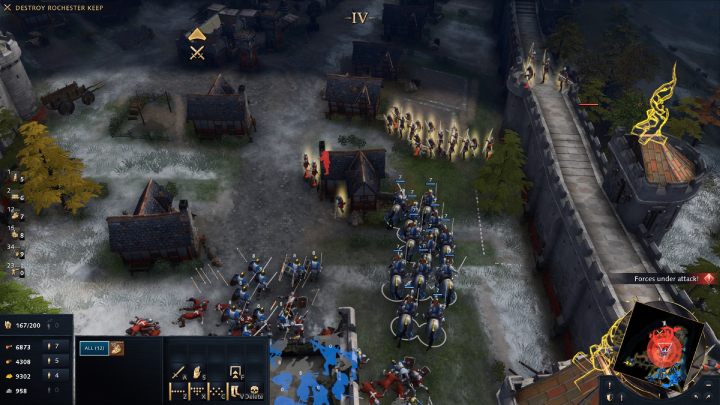 Once the gate is destroyed, you can move in your infantry to attack the enemy troops. The archers should support the infantry and finish off any survivors left on the walls.

After getting past the city walls, send your cavalry at the enemy archers. Use battering rams and trebuchets to destroy military and residential buildings. This will stop the production of new units and reduce the enemy's maximum population. 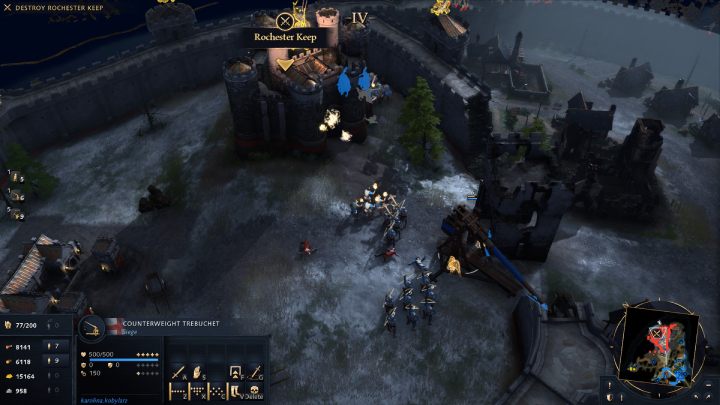 There's a hostile cavalry squad behind the next set of walls. Use spearmen against them, your ranged units should support them and dispatch enemy archers.

Use your siege machines to destroy the gate leading to Rochester Keep. Once you're inside finish off the remaining enemies, destroy two military buildings, and finally, tear down the castle.