This Age of Empires 4 guide page contains information on the North to York mission in The Normans campaign. You will learn how to stop the invasions of the Danes and advance the settlement to a new era. With our help, you will get beyond the city gates to take over York. 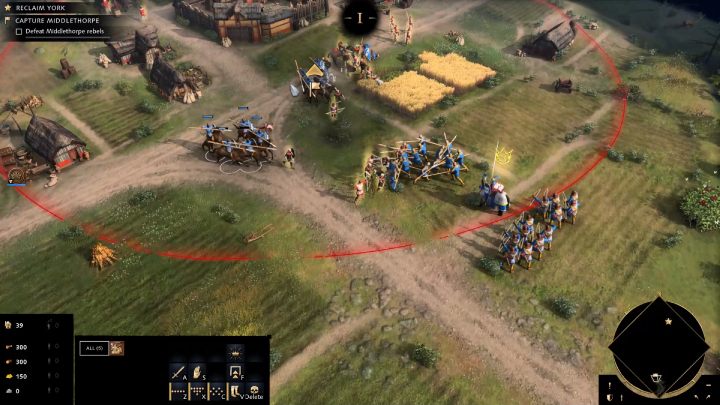 Once the mission begins, mark all your units and move along the road. When you reach Middlethorpe, get rid of all enemy soldiers within range of the red circle. When you take over the settlement, new mission objectives will appear in the upper left corner of the screen. 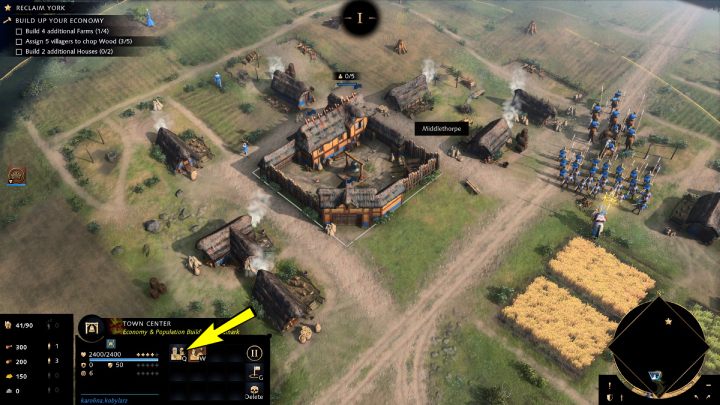 To complete new mission objectives you have to:

In the settlement, you will already have 5 inhabitants. Click on the main building in the village and produce additional settlers. 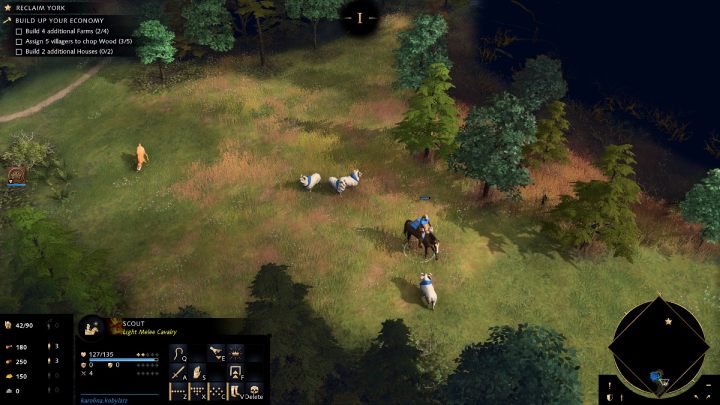 Select 5 inhabitants and click with the right button on a nearby tree. Next, build the farms and houses. You can find the icons of buildings that each inhabitant can build at the bottom of the screen after clicking on the settler.

Send a Scout to explore the area around the settlement. Bring the sheep you find to the village. 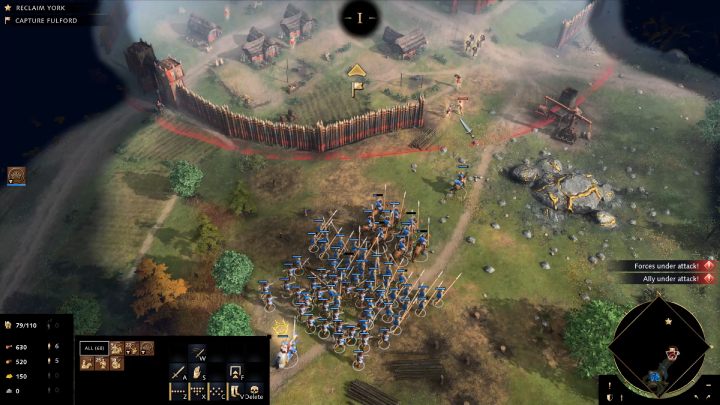 After completing all objectives, gather the troops and head east. Walk along the widest road until you reach the next town, Fulford. When you reach the fortified walls, do not destroy the gate. Go around the walls - the fortification is not finished, so you can easily get inside. Kill the enemy army and take over the settlement. 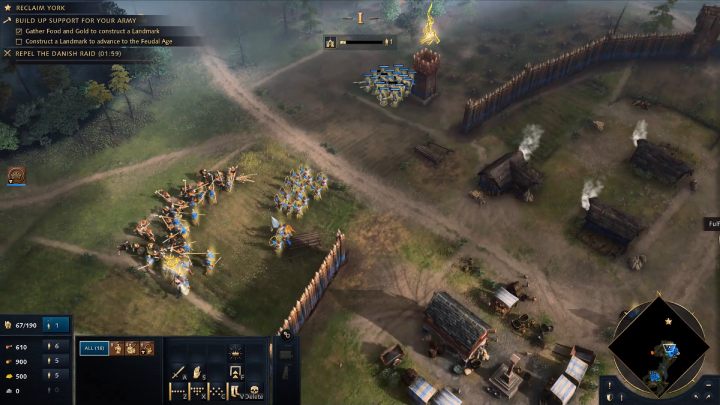 After capturing the town, send the settlers work in the gold mine. You can also produce new inhabitants and build Barracks to hire new soldiers as soon as possible.

Place your army at the northwest wall of Fuldord town, where the Danish will attack. Defeat all enemy soldiers or endure a 2 minute attack. 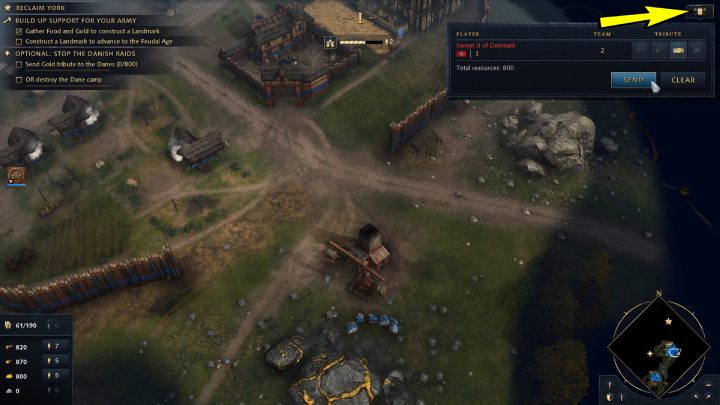 Once the attack is repelled, 2 new optional mission objectives will appear. To stop the Danish rides, you can:

Once you have collected enough gold, click on the icon at the top right of the screen and send the gold to the Danes or gather an army and head west. 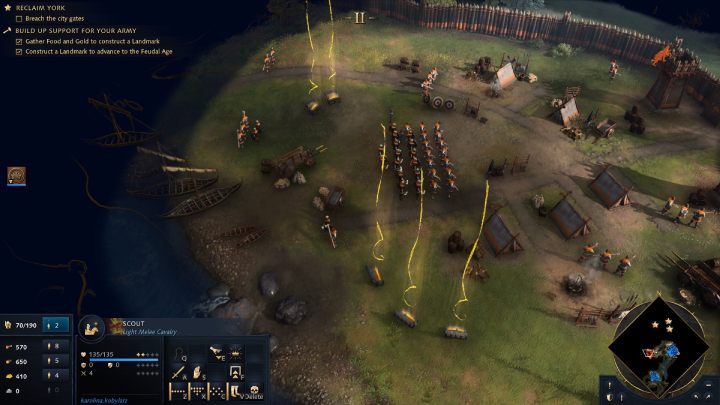 The Danish camp is located west of Fulford. In the camp, there are several resources chests, which might be useful later in the game.

Whichever method you choose, we recommend that you deal with the raids as soon as possible - they are quite frequent and interfere with completing the missions. 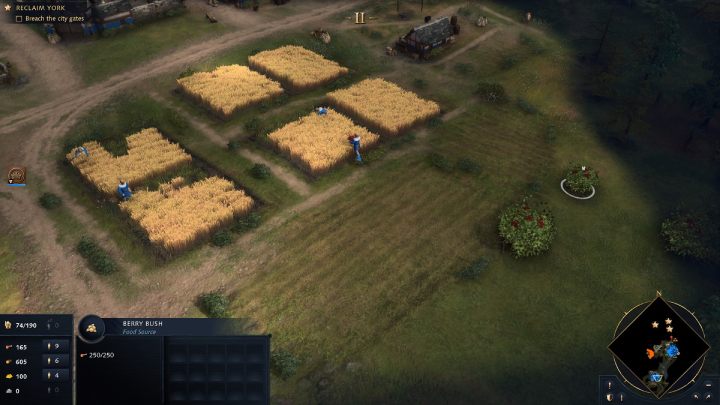 The main focus of your population should be food and timber production. Leave no more than 2 settlers for gold mining, hire the rest to farm or hunt.

To complete new mission objectives you have to:

Advancing to a new era 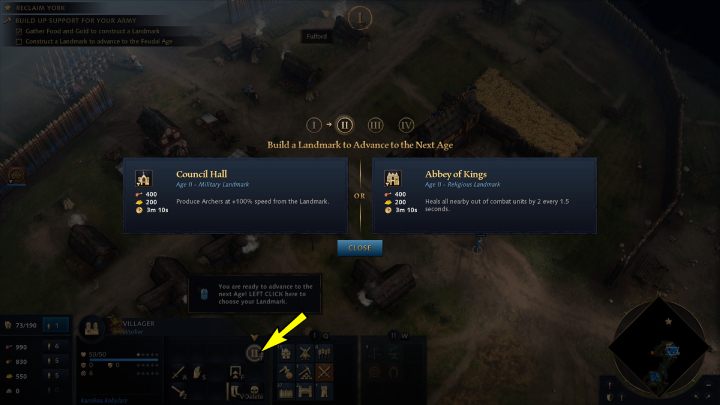 Collect 400 meat and 200 gold, select a settler, and place one of the buildings to advance to the next era. Council Hall allows you to produce archers instantly, and Abbey of Kings restores health to units that stand near the building.

After building the Stable, place such buildings as Archery Range and Blacksmith. When you move on to the next era, you can buy upgrades for your soldiers in the Barracks.

Gather the troops and head north to conquer York.

Conquering the fortress in York 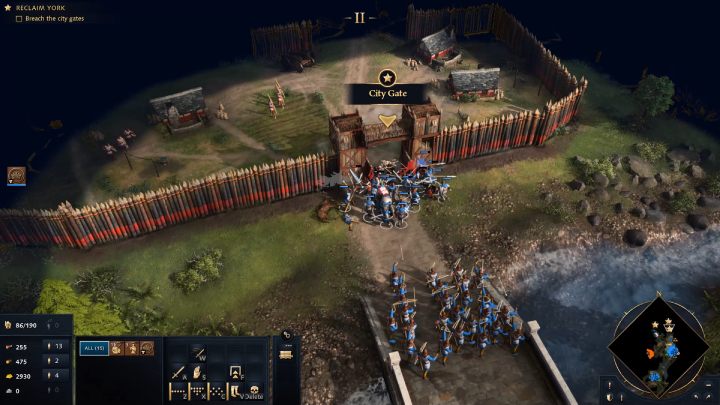 Eliminate the enemy army and then destroy the first city gate. In the meantime, start producing new units.

Set up Rally Points at the bridges to the city so that new soldiers can quickly join the battle. 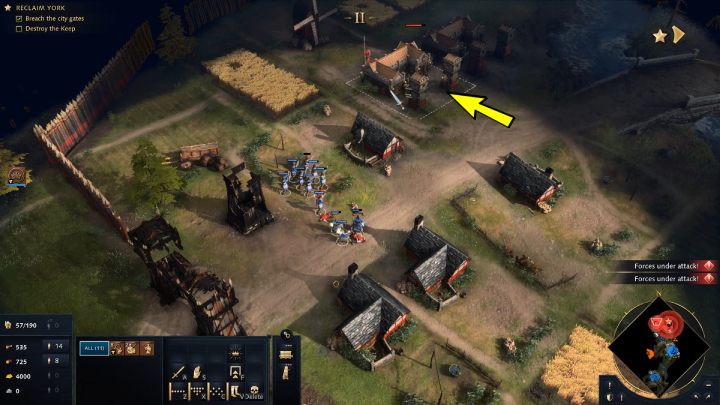 Divide the army into 2 equal units. The first unit should be standing at the south gate to York that you just destroyed. With the second one, get back the bridge to the main road and head west. After the next bridge, you will find more enemies and a gate to the city. Break through fortifications and destroy enemy buildings.

Focus on destroying buildings that supply the enemy with new soldiers. Set fire to Barrack, Archery Range, and Stables to hold the production of enemy troops. 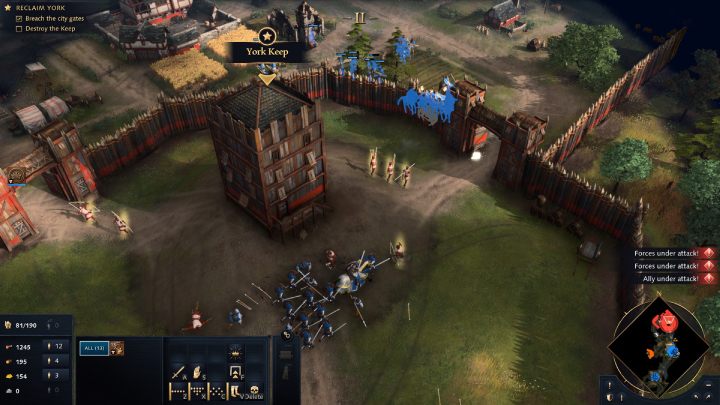 Finally, kill the survivors and destroy the fortress in York.