Plague Tale: Requiem is a game in which you can easily die or make some serious mistake. Our guide offers a beginner's guide, which you should familiarize yourself with before you start playing. You will learn, e.g. about common mistakes, clever ways to eliminate or avoid enemies, or how to deal with hordes of bloodthirsty rats.

Don't use up knives when fighting opponents 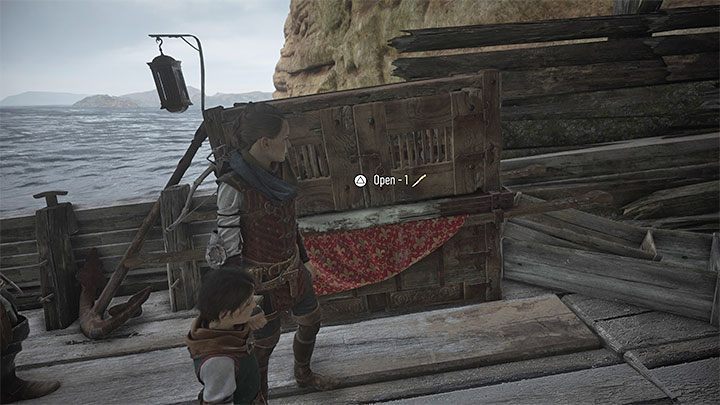 Knives are very useful gadgets in Plague Tale Requiem, but they have one major drawback - they are disposable items, and no matter under what circumstances they are used, they are lost once the action is performed. This forces you to find more.

Try to always have 1 knife in stock, because only with them you can open locked workbenches with tools and other valuable loot. If you don't have a knife, you will not be able to open a workbench. Knives can also be used to kill enemies, but there are various other methods by which you can achieve the same effect.

Later in the game, you can increase the number of knives you carry by purchasing the Belt cases upgrade. We described this in more detail on a separate page: Knives - how to carry more?.

Purchase an upgrade that removes the need to find tools 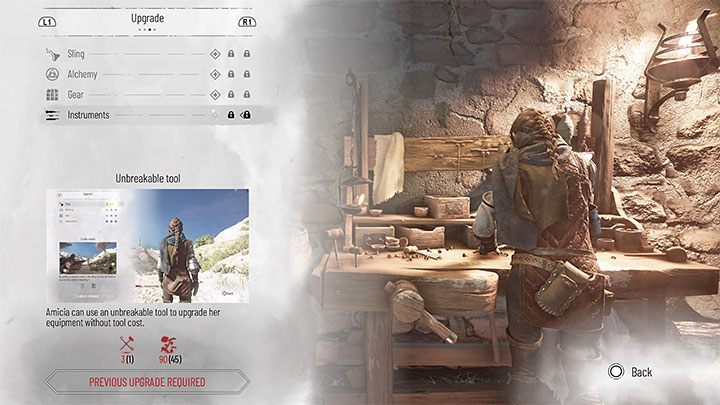 Tools are needed by default to create upgrades at workbenches. You can find these items in the game world along with other loot, but they are rare and can be well hidden.

You can fortunately make searching for tools less stressful. Get the Unbreakable Tool upgrade fairly early in the game. Its effect is to remove the requirement for tools. You will "only" need the usual crafting parts (Pieces), so you can unlock more upgrades faster.

On the Character development page, we described upgrades as well as Amicia's skills in more detail.

Increase the usefulness of Amicia's crossbow with upgrades 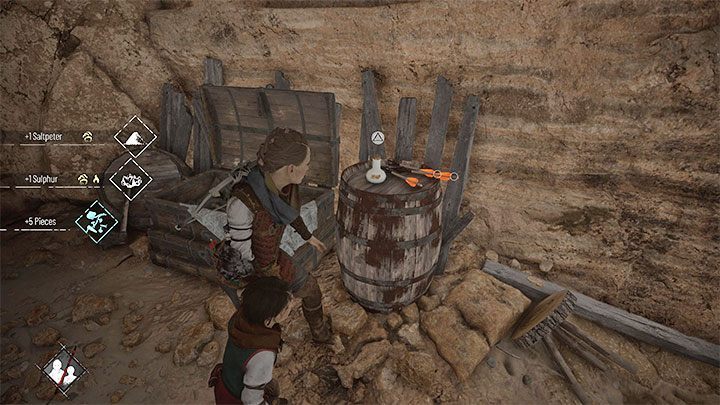 You will acquire the crossbow in chapter 5, but initially it has a huge drawback - you can only carry 1 bolts in your inventory and you always have to look around for a new one after firing. This can severely limit the use of the crossbow, but it doesn't have to be that way for the entire game.

These upgrades are very helpful:

More information about the crossbow and its main uses is on the page Crossbow - how to unlock? in the FAQ section.

Carefully explore the locations you visit and look for secret locations 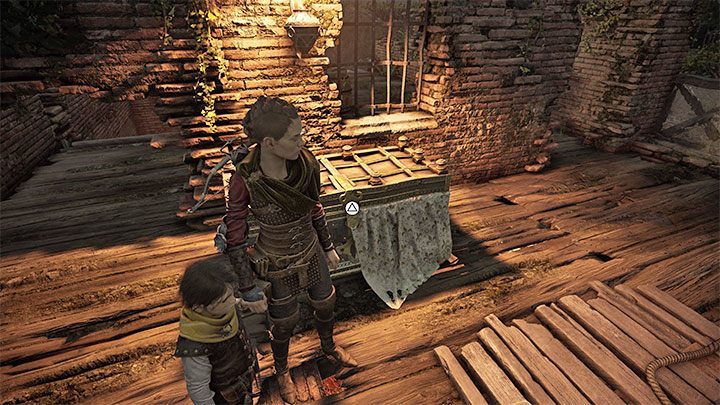 In Plague Tale Requiem, thorough exploration of the areas is highly recommended. You can, first of all, obtain loot in this way - ammunition or components for crafting. There is also the chance to come across more interesting and unique finds, e.g.:

Some secrets are well-hidden. For example, look around for higher shelves or gates that can be opened by destroying a blockade with the slingshot.

We've included the secret objects in our walkthroughs. You will also find information about them in the Secrets and collectibles chapter in our guide.

Stay close to light sources in locations with rats 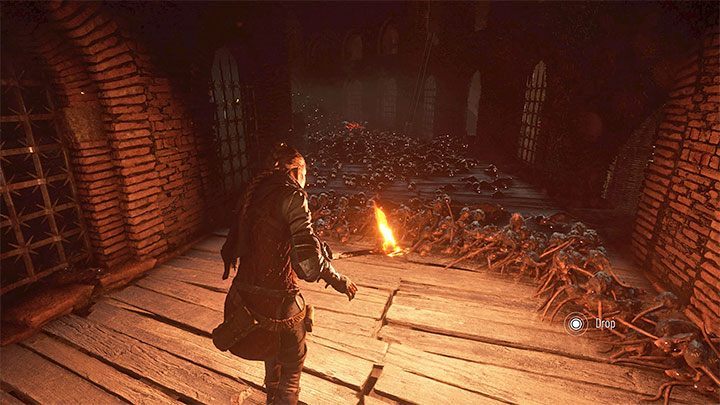 Being devoured by rats is the most common cause of death in the game, as you can easily forget yourself and enter an area where they are able to get you. You must remember to stay within range of the light source at all times. They can be a torch, a bonfire or a basket. Some light sources can be moved - these include sticks (they have a limited duration), torches taken from stands, or a prism capable of refracting light (it only appears in later chapters).

You can create new sources of light, you don't have to rely only on the ones that are available in a particular location. The game also includes options to temporarily chase away rats and distract them (Odoris gadget). All these methods can increase your chances of survival.

Rats can devour your opponents 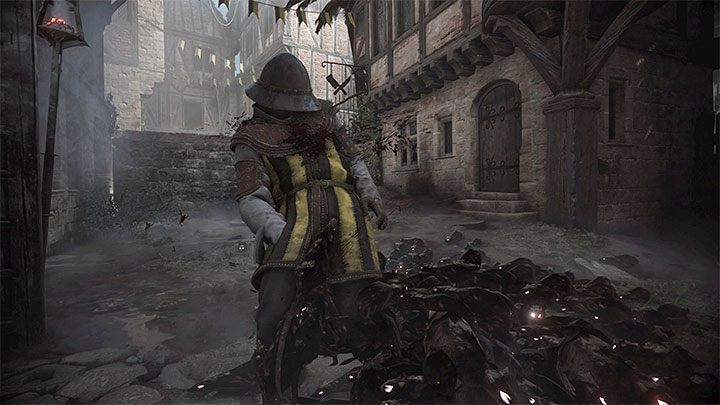 You can sabotage light sources to make rats devour enemies. You can do that with the Exstinguis gadget, which you will unlock relatively early in the game.

Exstinguis can be used on enemies - if you extinguish the torch carried by a guard patrolling the area or a nearby bonfire then they will lose protection from the rats and can be devoured. This is an excellent way to eliminate enemies without risking a direct confrontation or alerting the neighborhood about your position. 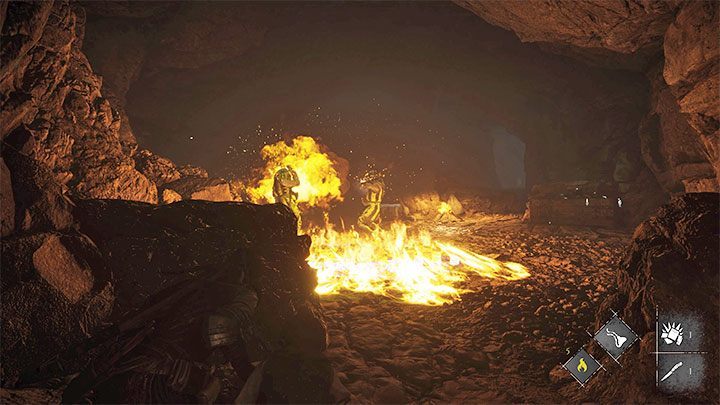 Neutralizing light sources is not the only way to cleverly eliminate enemies. A very interesting way is also to use tar and Ignifer - you will unlock these gadgets early in the game. The general idea is to:

If you encounter an opponent walking with a torch, you can immediately throw a pot of tar at him - you don't need to use Ignifer.

Hiding in tall grass is the basis of stealth 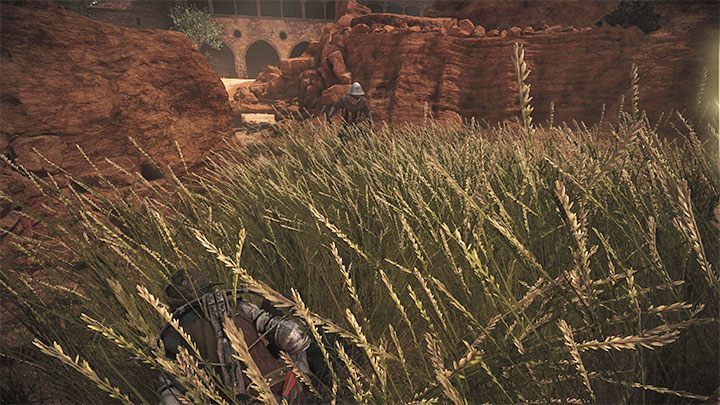 The most important sneaking technique hasn't changed since the first part of Plague Tale - you can hide in the tall grass and you'll be safe there as long as enemies don't go into an alarmed state. They can then start searching the area and, e.g. search the grass.

You can also distract the guards. In the first game, you could throw rocks at chests with equipment. The second method is new and involves using Sophia prism's to set the grass on fire. This technique is unfortunately only available in selected chapters.

Amicia's companions are not immortal 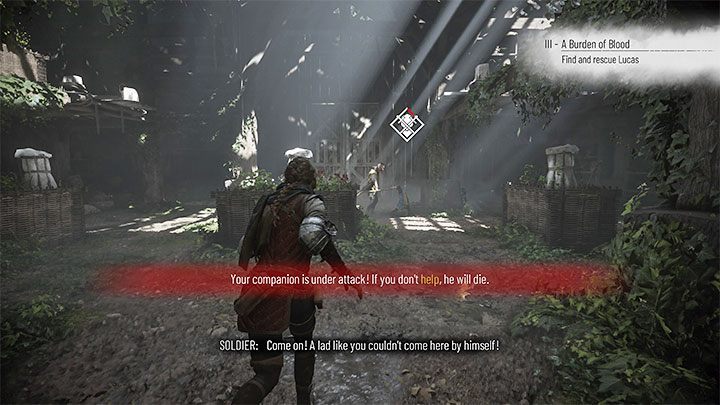 For the vast majority of the time, the main character travels with 1 or even 2 companions. Allies can hide, but they are not immortal. Their lives can be in danger during direct fights and in predetermined moments of the game (e.g. after the heroes are suddenly separated).

You must always help a comrade in need before they get killed. That person is marked with an icon and you can determine how much time you have to help them - you must kill the enemy or enemies that threaten your ally. Keep this in mind, because the death of a companion means game over and having to restart the sequence.