During Chapter 7 (Felons) of Plague Tale: Requiem you'll travel with Arnaud, a new companion whose powers we describe below. Our guide shows how to unlock the entrance to the caves, how to avoid rats inside, how to reach the shipwreck, and how to find smugglers' hideout. 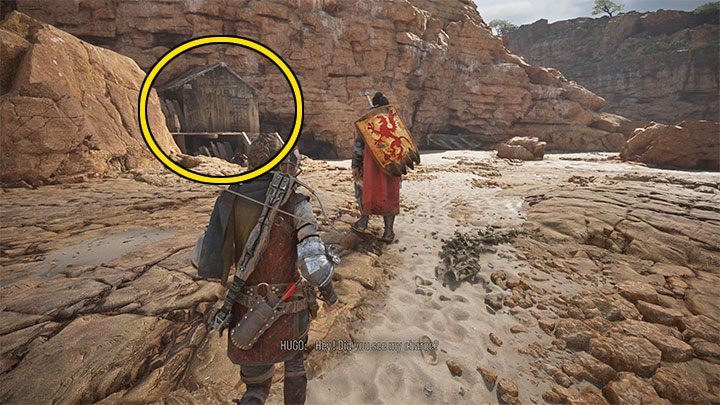 There is only one possible path here (if you choose others, you'll be turned back) - it leads to a viewpoint where Hugo is found. The heroes will set off towards the beach.

Along the way, investigate the hut on the left (screenshot above). You can enter it through the shutter and there is a secret inside (Hugo's Herbarium specimen - Black Headed Gull). 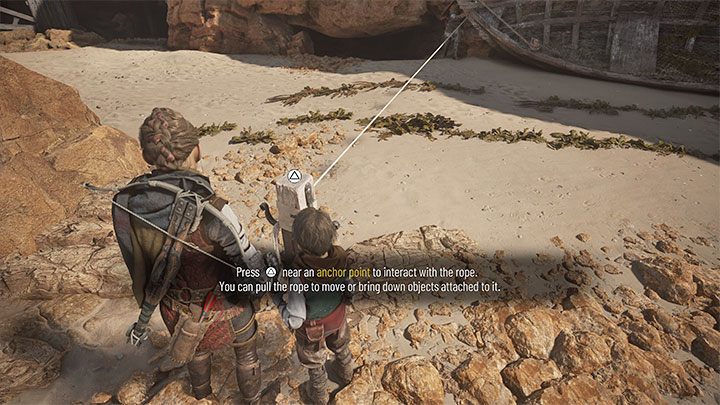 Once you reach the boat, you'll receive an objective to find an Anchor Point. We show it in the screenshot above - to continue, you need to press the interaction button (Triangle/Y on consoles). Hold the same button to pull the boat towards you. 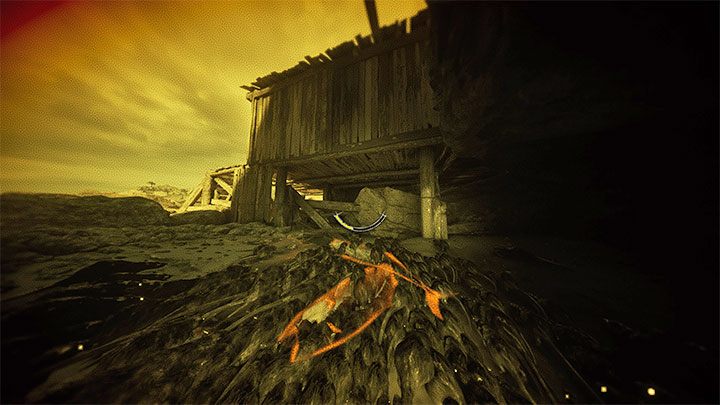 Rats will appear in force now, and you need to draw them away from the cave entrance. Start by firing the slingshot at the hanging fish on the left.

Now, hold the command button (down on the pad's crosshairs) so Hugo takes control of the rats. Lead them to the dropped fish. You can now enter the caves - crouch to continue.

From now on, you need to use Hugo's power in moderation, as otherwise, his stress bar will fill. Best to use it only when it is needed for a puzzle. 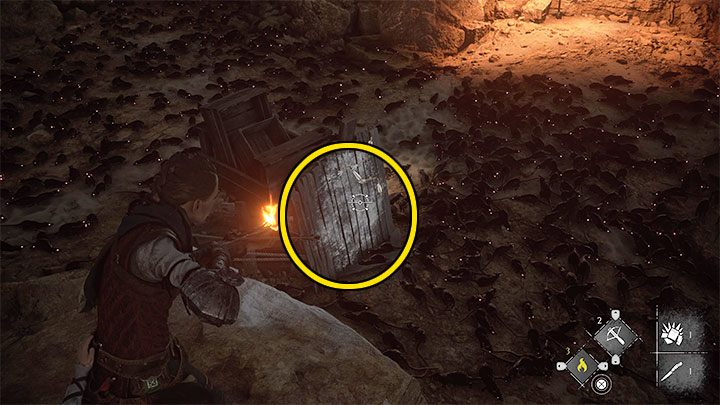 As you reach the first cavern, you'll encounter some rats. To get past them, you need to: 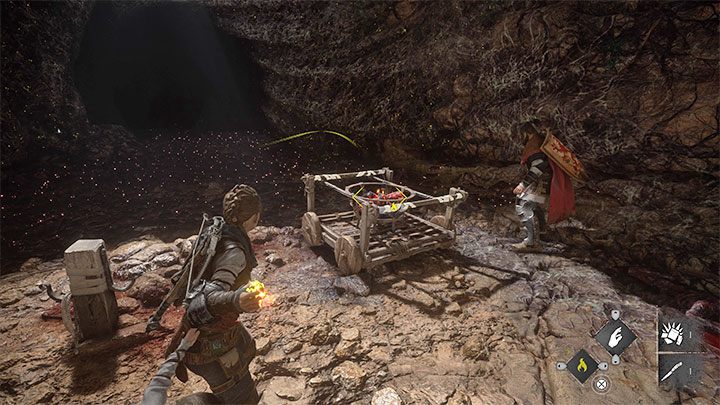 Once you're past the first cavern, you'll notice a shipwreck in the distance - this is your new destination. Equip a stick and set it on fire to create a mobile safe zone.

You'll reach a new Anchor Point - grab the rope and pull the wheeled cart towards you. Set fire on the brazier in the cart and start pushing it. 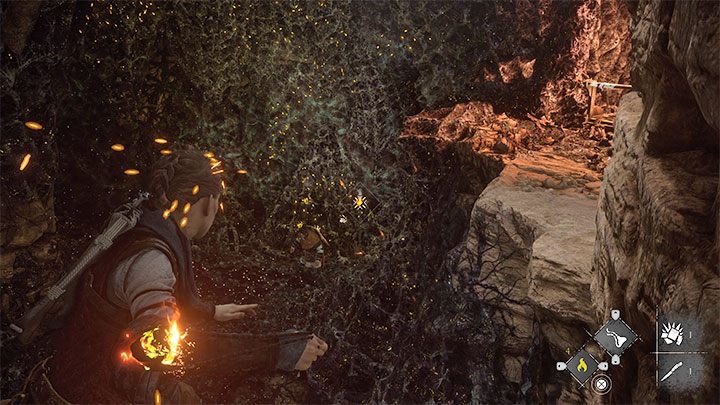 Push it all the way to the end. Follow the narrow edge. Unfortunately, Arnaud will fall down. You must quickly create a source of light for Arnaud - fire Ignifer at the torch, which is next to your ally. This way, rats won't devour Arnaud.

Open a way for Arnaud 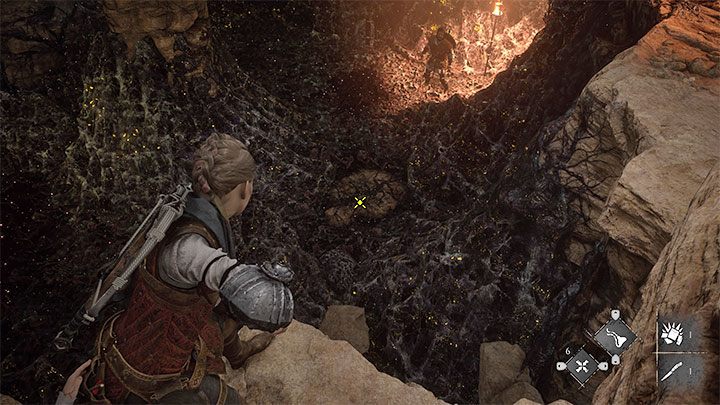 A new item will be introduced - Episanguis crystals - which you can now find as loot. The first such item will be given to you by Arnaud (hold down the command button and press the interaction button)

You can produce Odoris - a gadget to distract rats - which makes rats flock to the place where the projectile landed. Aim for the surface next to Arnaud (above image) and throw Odoris there. The companion will seize the opportunity and run to the left. 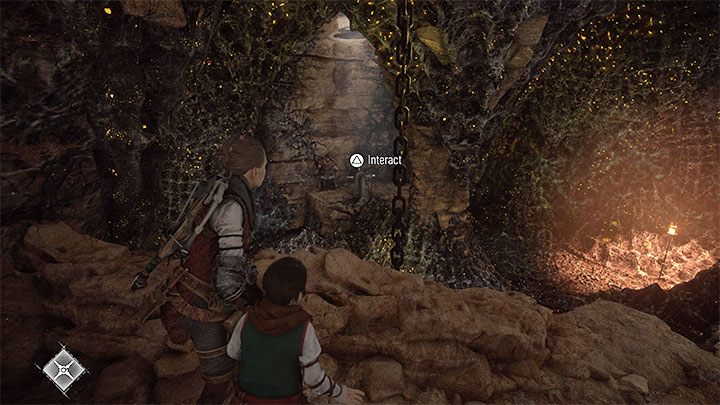 Look for a crank (screenshot above) and command Arnaud to use it. 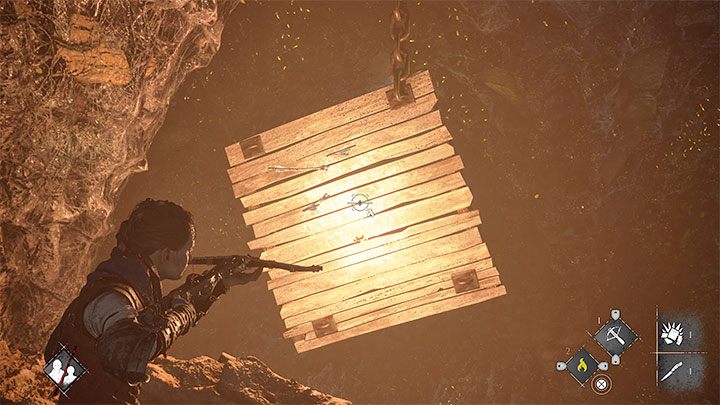 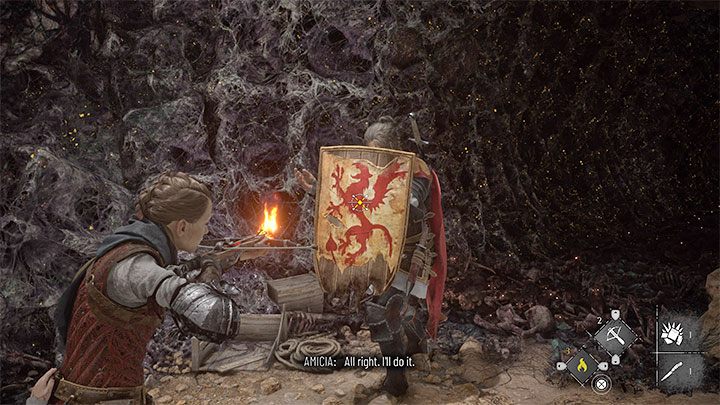 Thanks to your efforts, the group is reunited. You need to cross a narrow tunnel filled with rats. To continue, you need to use the crossbow again - fire an Ignifer bolt at Arnaud's shield. Arnaud will now use the fiery shield to fend off rats during the crossing. You'll emerge back to the surface. 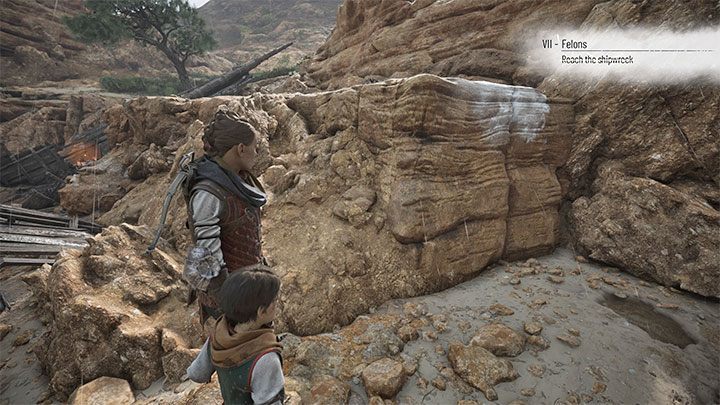 Descend to the beach. There is a workbench on the left.

Before you embark toward the wreck, make a detour and climb the ledge on the left (screenshot above). This path leads to another wreck and taking a closer look at it unlocks a Souvenir - The Survivor. 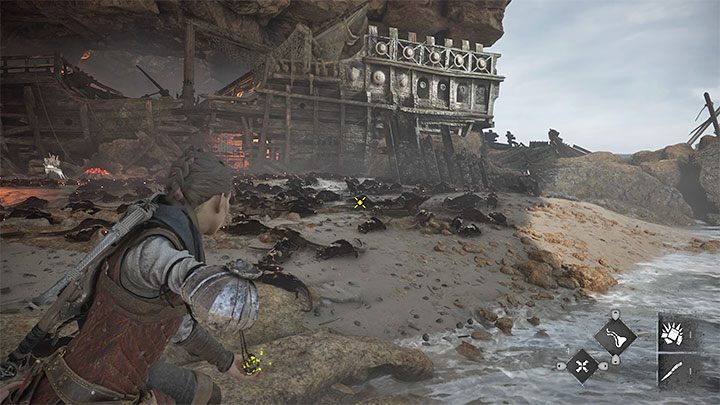 Once you reach the large wreck, new rats will begin to appear. Again, the easiest way to approach is to use Odoris, but always make sure that all rats are gone and the path is safe to cross.

Alternatively, you can craft some Ignifer projectiles or use a stick (remember that they are consumed quickly). You'll encounter a torch a bit further ahead. 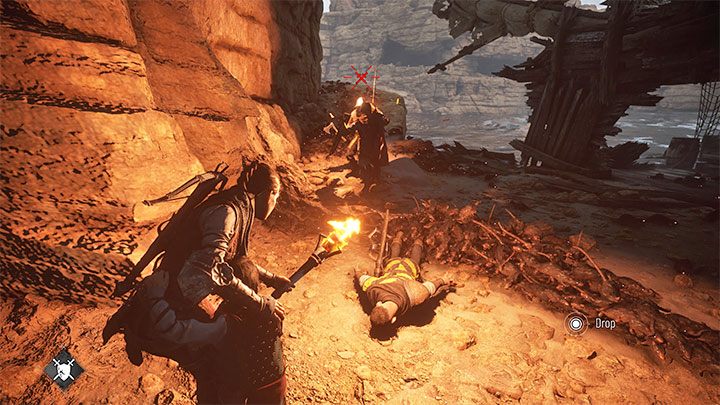 There are also new guards hanging around the wreckage. You can evade or eliminate opponents. In addition to the already known techniques (e.g. putting out torches so the enemies are devoured by rats or throwing tar at them) you can also use Arnaud's help - he can attack enemies and defeat them in melee combat. Make sure that Arnaud is facing one enemy at a time, otherwise he may be defeated. 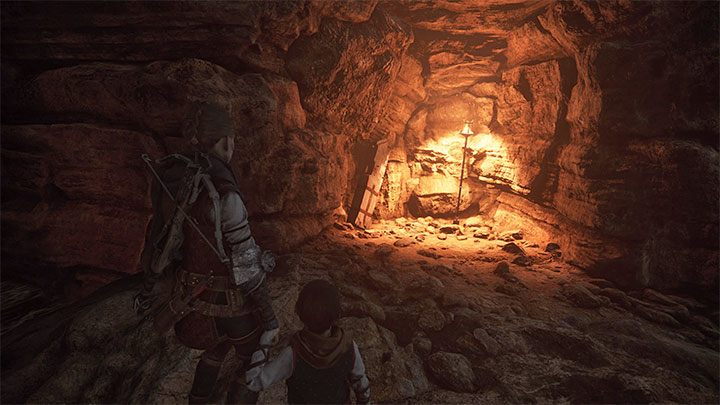 You can use the opportunity and investigate the wreckage thoroughly in order to obtain additional loot, but you need to watch out for rats. There is a secret chest next to the winding path on the right. Another secret chest is on the lower level of the cave - to get it, you need to light the way to it. There is also a smaller wreck nearby, and inside it there is a locked workbench (you need to spend your knife to unlock it).

The exit from the current location can be viewed in the screenshot above), which is the upper level of te caves. To continue, you need to move the obstacle and squeeze between the rocks. Follow the partially flooded corridor to reach the meeting point with Sophia.