Escaping the fort is the final stage of Chapter 3 (A Burden of Blood) of Plague Tale: Requiem. Our walkthrough shows how to escape from the dungeon, how to sneak through the fort and how to complete the puzzle involving a ballista in order to create a diversion and escape.

Escape from the dungeon 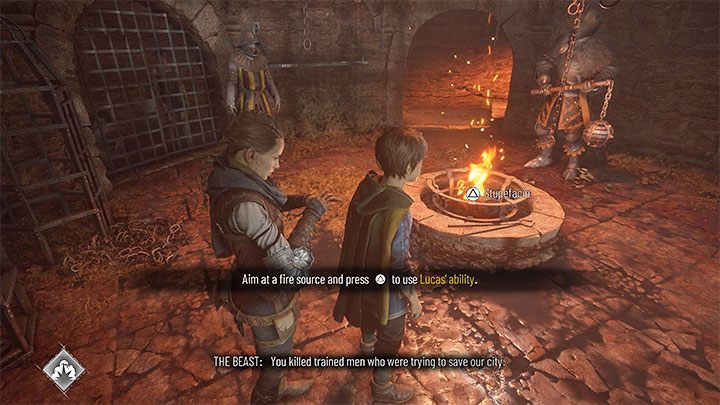 Once you're back to controlling Amicia, leave the cell. Hold the command button (L1/LB on consoles), turn to the fire and ask Lucas to use Stupefacio. This attack temporarily blinds the opponents.

You can now start your escape - follow the only available path until you lose the tail. Approach the nearby shutter. 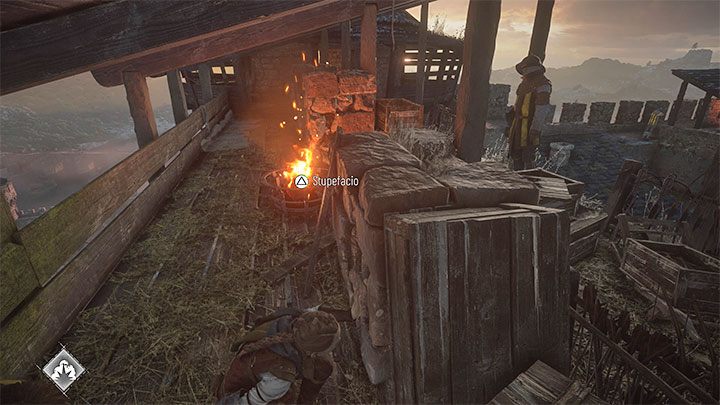 Turn right and hug the wall and follow it to the next rooftop. You're going to have to sneak - Amicia is currently without her equipment, which means no ability to kill encountered opponents. 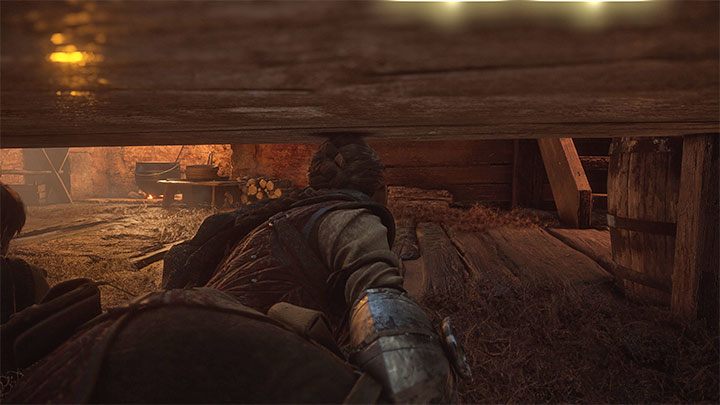 You'll reach walls guarded by two guards. Enter through the lower shutter. Immediately after squeezing through, hide under the table and wait for the guard to stand idle. Once that happens, get out from under the table, reach the stairs and continue forward. 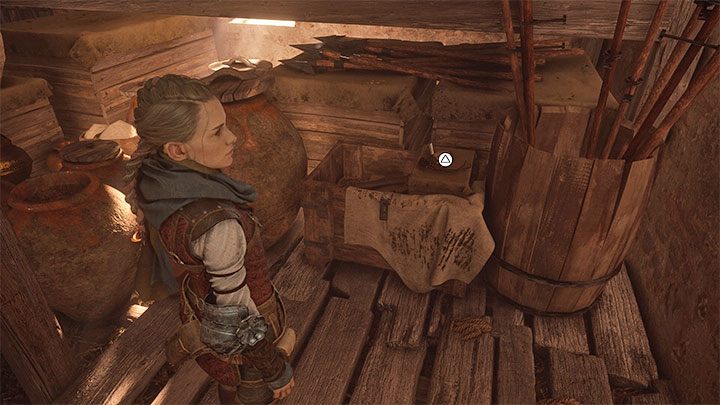 You will reach a large barn with a hanging ballista. Start by using 2 nearby ladders to get to the bottom floor.

Go straight to the other wall and turn left. Here you'll regain all of Amicia's equipment, including the slingshot. 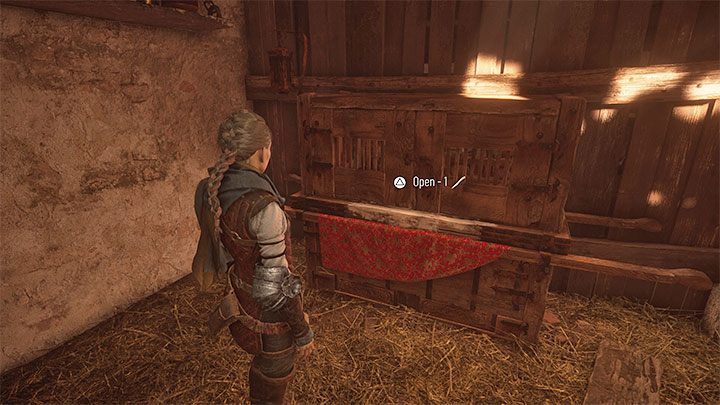 Once you regained your equipment turn 180 degrees to find a locked Workbench. This time (and the first time this happens), a knife is required to unlock it, destroying it in progress. If you've managed to open the workbench, you'll find a tool and some crafting reagents.

Use the ballista to create a diversion 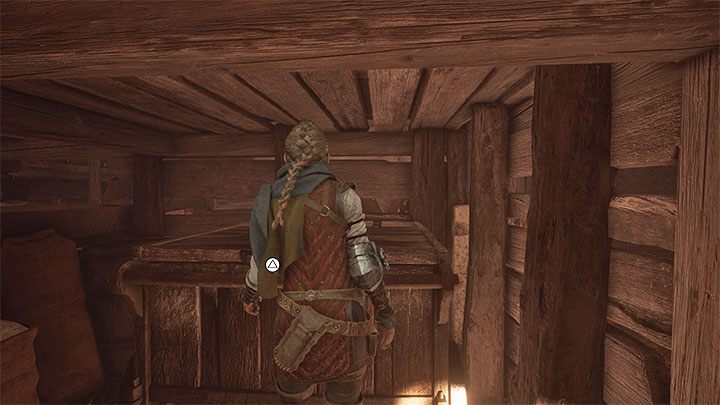 During the first attempt to leave the barn, the group determines that there are guards outside. There is an idea to use the ballista in the barn as distraction.

Wait until Lucas moves one of the objects in the barn. You can now start moving the platform on wheels. Push it to the area where you can use it as sidestep to climb to a higher shelf. 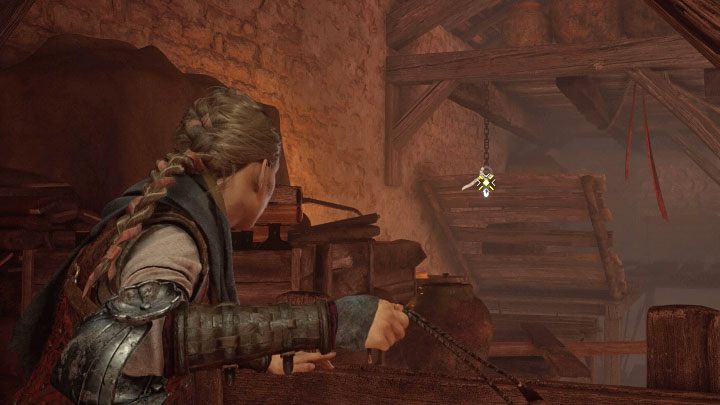 After climbing up, turn to the right. You can use the slingshot to fire at the hook shown in the screenshot above - the action will lower the drawbridge. Get through the drawbridge to the other side (to the area with the ladders), and you'll find a souvenir (Our Home). 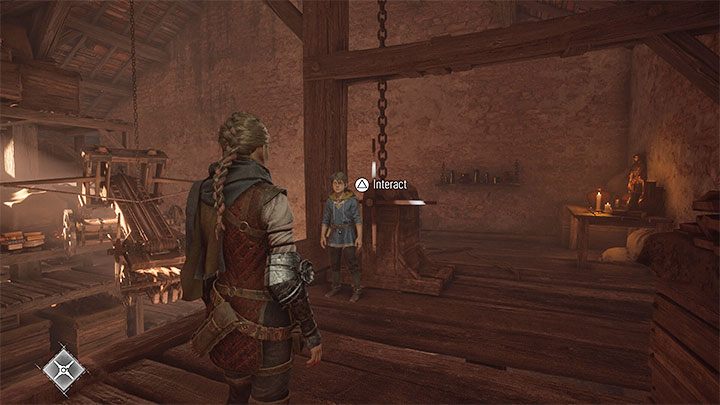 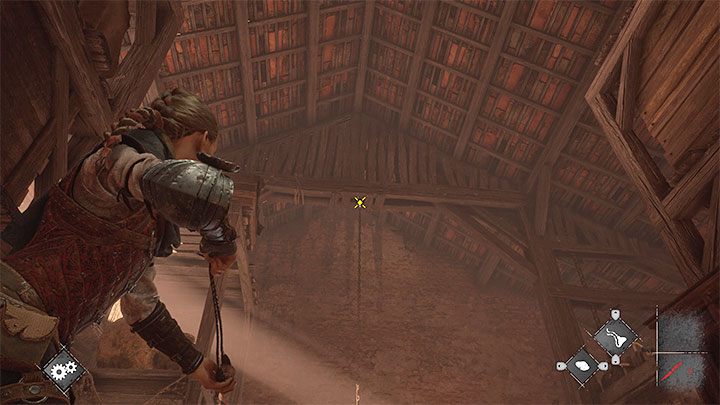 Go downstairs and aim your slingshot at the hook near the ceiling (attached screenshot). This will detach the ballista. 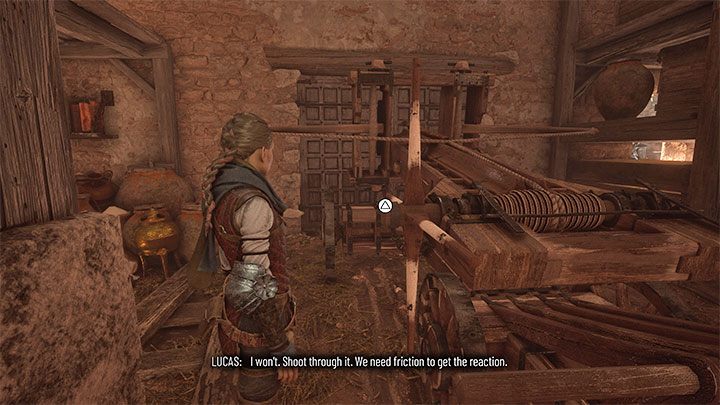 Proceed to push the ballista - it must ultimately stop in front of the barn gate. Finally, use the ballista's crank to charge the projectile and fire it with maximum force. The distaction worked - the escape ends Chapter 3.