During the further part of Chapter 2 - Newcomers of Plague Tale: Requiem, the first encounter with rats will take place. Our walkthrough explains how to avoid being devoured by rats and how to distract them, how to lower the central platform, how and where to obtain alcohol and sulphur, how to use Ignifer ammo and how to complete the puzzle with 4 bells and symbols. 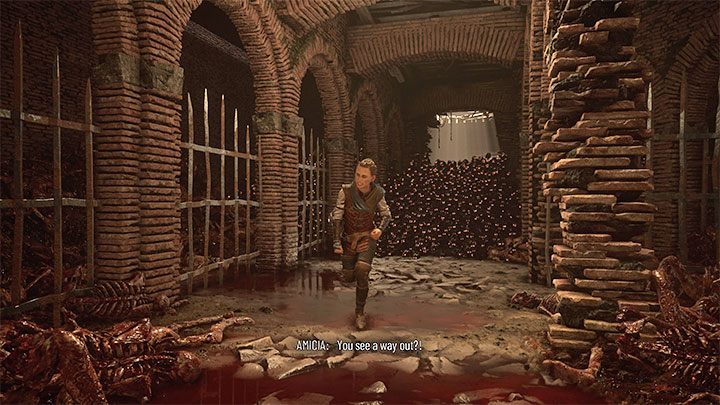 Following the collapse of the wooden platform, you're now facing rats for the first time - and there are a lot of them. Start running. Run towards the bottom of the screen and the heroes will reach a door that will temporarily separate them from rats. 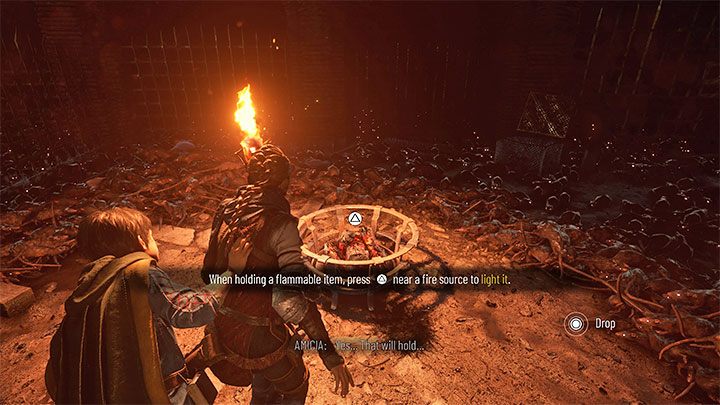 From now on, avoid entering unlit locations without needed equipment, as Amicia will be quickly swarmed and eaten alive by nearby rats. Only way of dealing with rats involve light sources and distracting them.

Take the torch and start exploring the area with it. You'll reach the first brazier - you can light it up and create further safe zones. Continue forward. Hang the torch on the wall and climb to the ledge above. 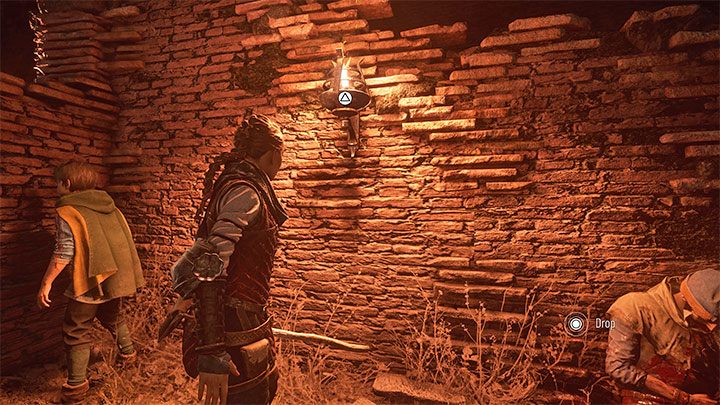 In the new area you will find Sticks - they can serve as light sources but are quickly depleted and you must always hurry when relying on them to light the way.

Equip a stick and ignite it and take it to the nearest brazier. Repeat this pattern with another stick and another brazier. 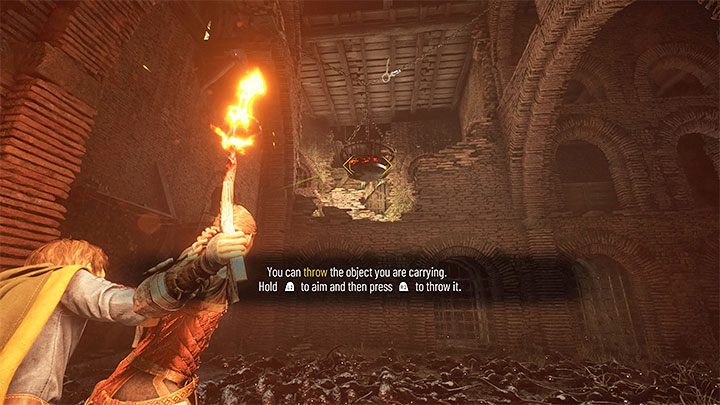 The next goal is to reach the ladder . You must:

The lit basket should swing and scare off nearby rats. You can use the ladder now. 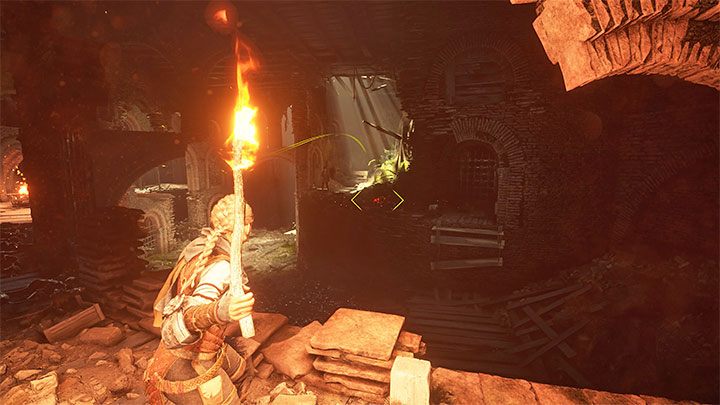 Go ahead and walk over the beam - Lucas will fall and you need to help him reach the place where Amicia is staying: 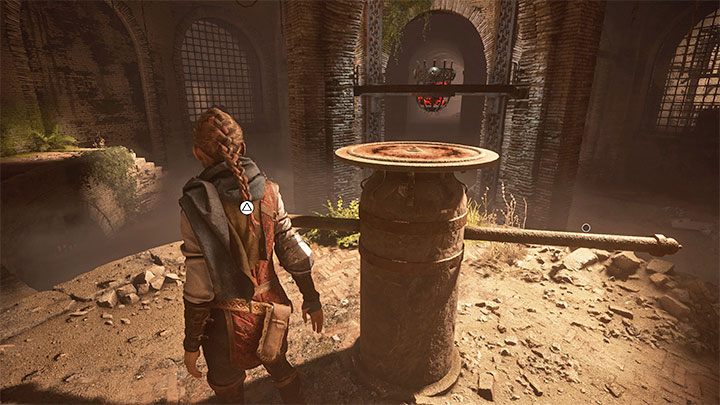 You can now use the new ladder. There is only one possible path forward. You will reach a room with a round platform which serves as a elevator . You have to lower it, but a puzzle needs to be completed in order to do that.

First, use the rotating mechanism . This will unlock new side rooms, but new rats will swarm to the scene. 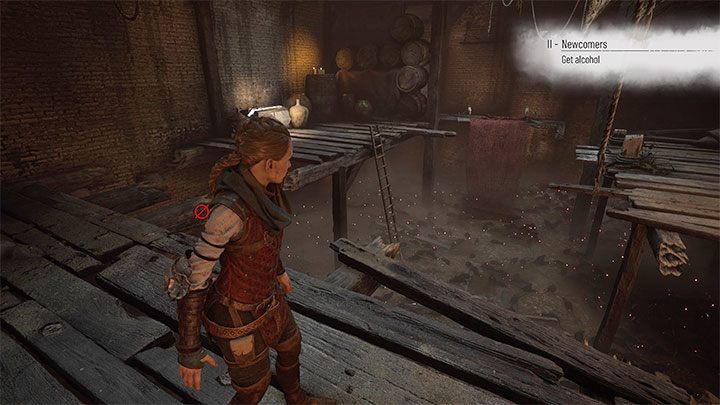 There are two areas to explore here . You need to explore the first one (screenshot above) in search of Alcohol.

Hug the right wall and follow the path by the wall to neighboring ledge. 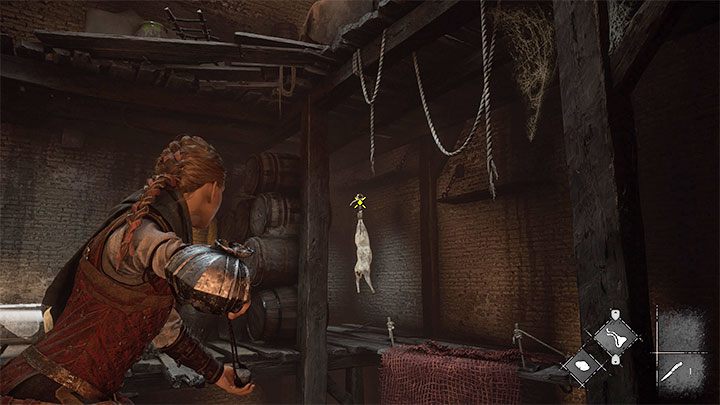 Use the slingshot on the meat hanging in 2 different places - the rats will reach the places where the meat lands.

You can now jump down, reach the ladder and open the chest with alcohol . Use the ladders again, this time to return to the central chamber. 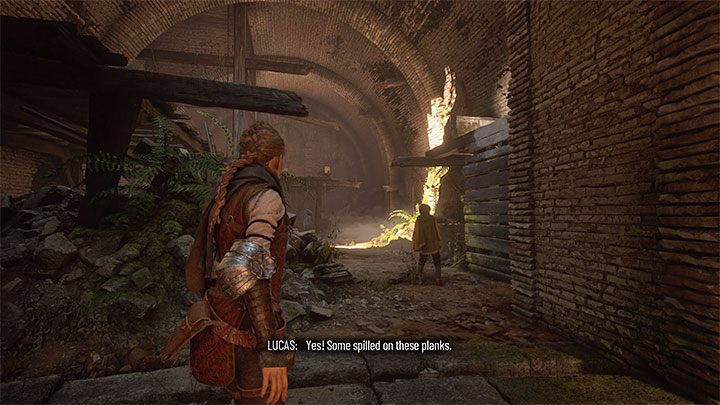 You now need to visit the other area for the Sulphur.

It is in the upper right chest. 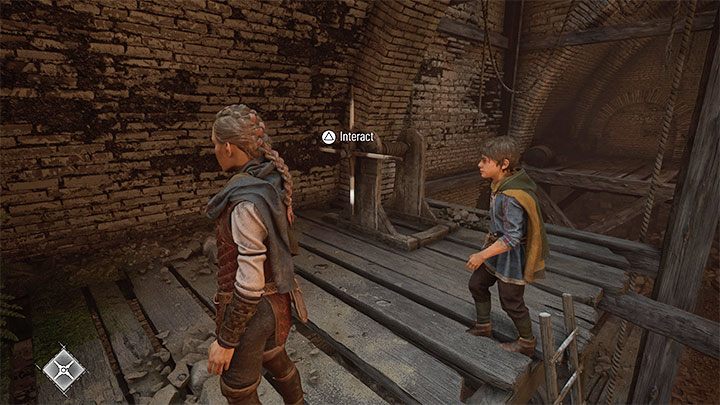 Reach the ladder on the left and order Lucas to rotate the mechanism (in console versions - hold L1 / LB and press Triangle / Y on the gamepad). 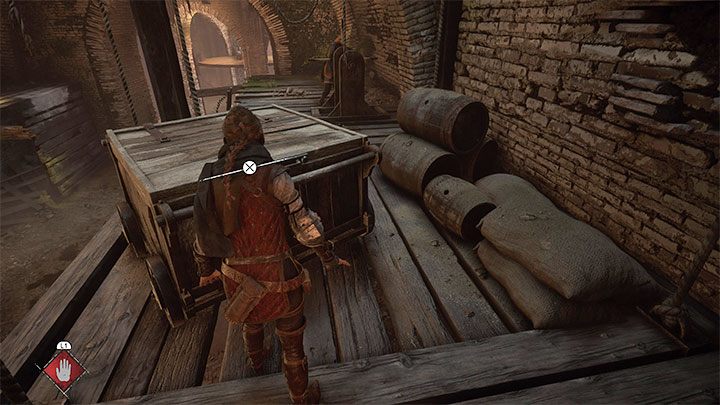 Wait for the platform to be lifted and walk over it to the adjacent ledge. Start pushing the cart on wheels - you have to bring it to the raised platform (picture above).

Order Lucas to stop holding the mechanism (same buttons as before). 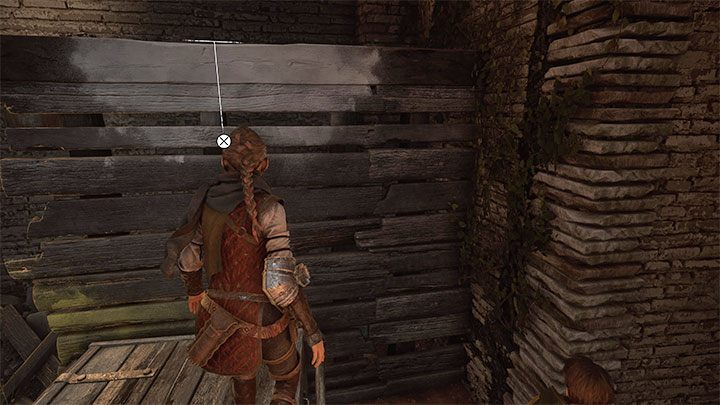 Jump down and push the cart towards the shelf with the chest . Climb onto it and then to the higher ledge. You can open the sulphur chest now. 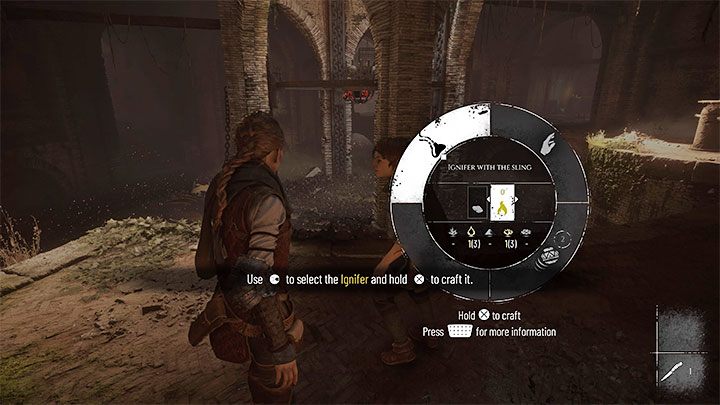 Go back to Lucas. You will unlock the Ignifer blueprint that can be used to set fire to surrounding objects.

Summon the equipment menu (R1 / RB), select the slingshot and change the ammo to Ignifer (right on the D-pad). Once you choose it, you can craft incendiary rounds.

Lower the central platform - next step 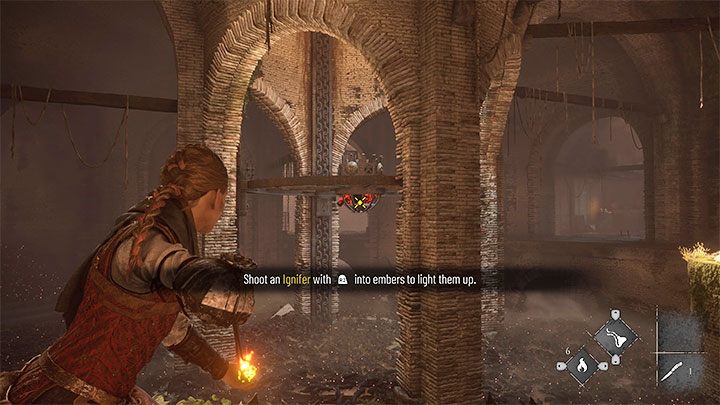 Aim at the glowing coals from the central platform. Hitting them with Ignifer will create a new light source. 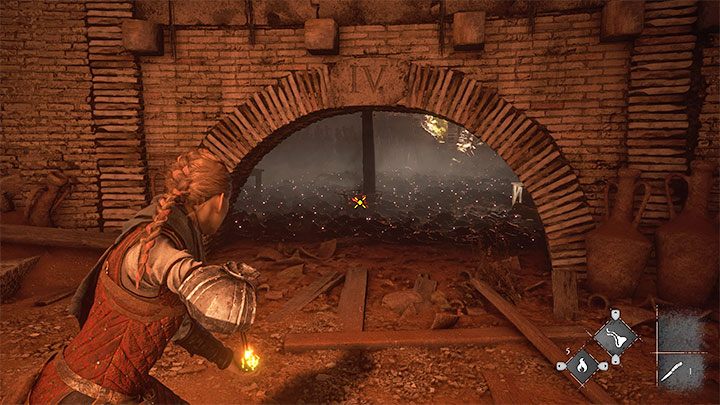 Now you have to explore the next side rooms to get to 2 new rotating mechanisms.

In the place shown in the picture, shoot Ignifer to the far basket . This will allow you to reach it safely. From now on, you can pick-up crafting ingredients - collect as many of them as possible to have access to a lot of Ignifer ammo. 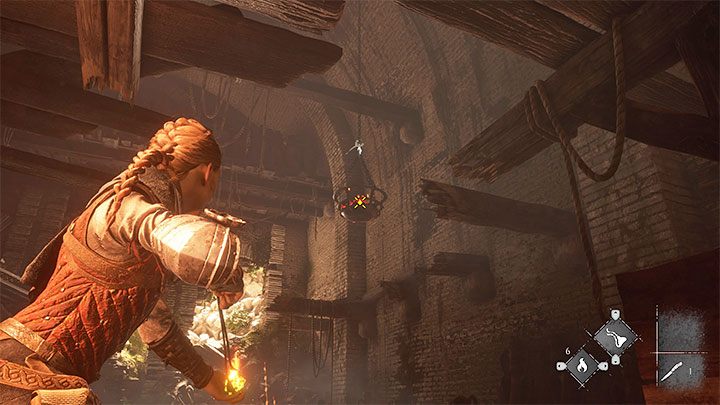 Fire Ignifer at the hanging basket (attached screenshot). Once its lit, switch to normal rounds and aim at the hook so that the basket falls down. 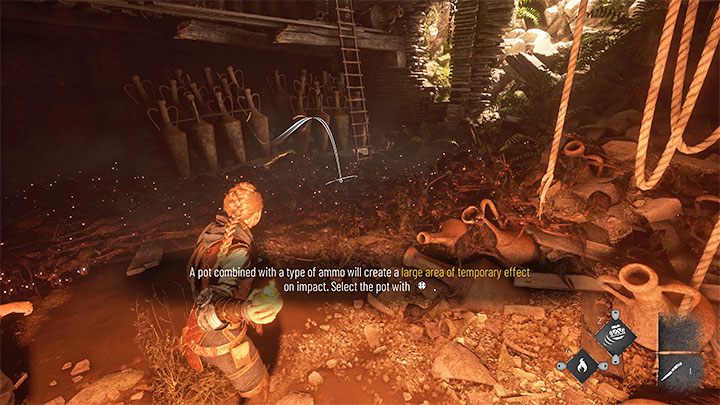 You'll unlock a new ability - creating Ignifer Pots - that explode when destroyed. Craft such item by accessing the drop-down menu and aim the pot at the area next to the ladder (screenshot above). The rats will run away, allowing you to access the ladder.

You'll reach the first mechanism - Lucas will stay with it. 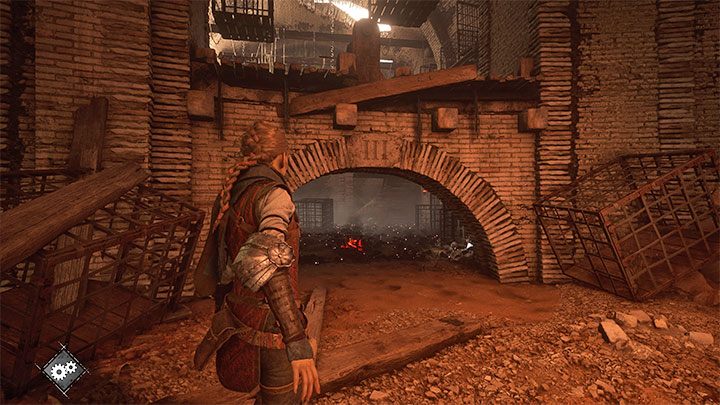 Reach the area on the opposite side of the room . Start exploring this location by setting the brazier on fire using Ignifer. 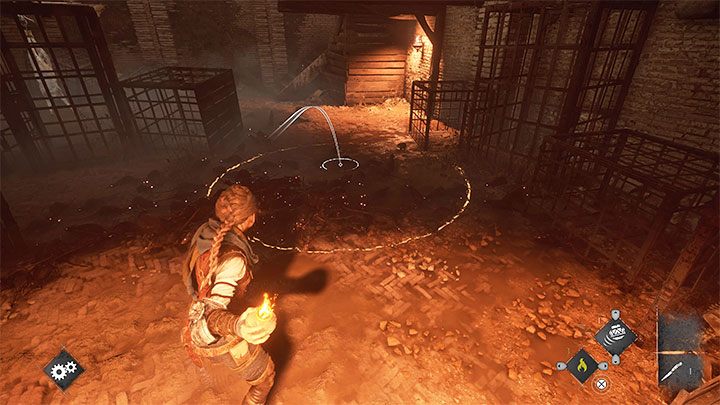 Fire another Ignifer on the far lamp and throw an Ignifer Pot to the floor. 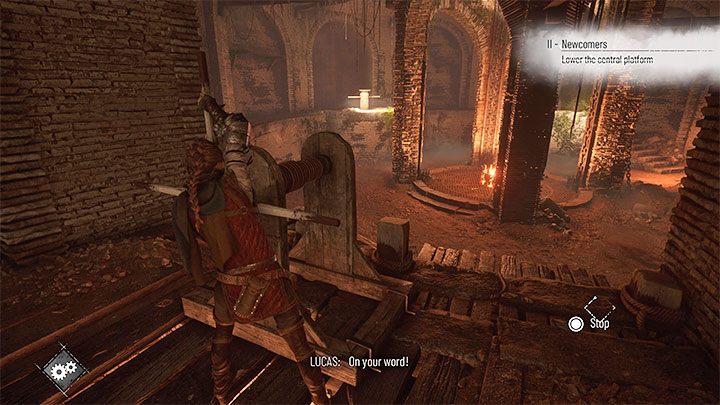 Switch to normal ammo and hit the hanging meat with your slingshot.

Completing all these actions will allow you to reach the upper floor and activate the second mechanism. Lucas and Amicia will work together which will result in the central platform being lowered. Make your way back to the platform and use it to reach the top.

Reach the south tower - next step 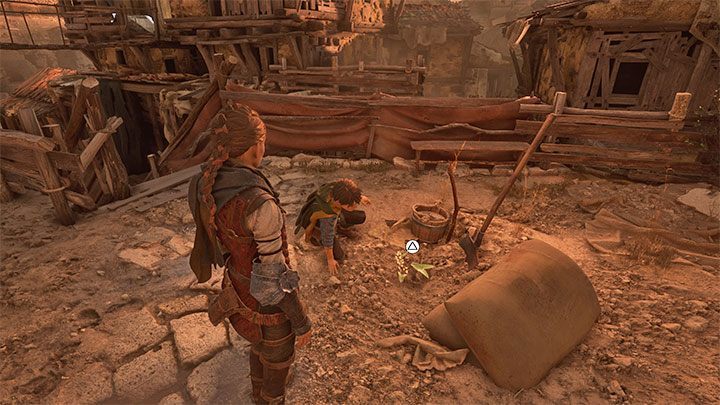 Keep following Lucas. Along the way, you'll encounter some farmlands - explore them to find another specimen for Hugo (Arrowhead). 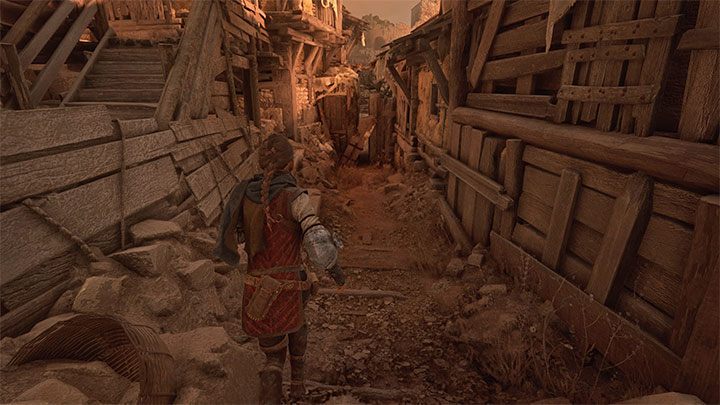 Make sure to do a thorough search of this area, as there are additional crafting ingredients and a new knife here.

The narrow passage shown in the picture above will allow you to access a new area. Make sure to clear the previous area before entering, as you won't be able to return here. 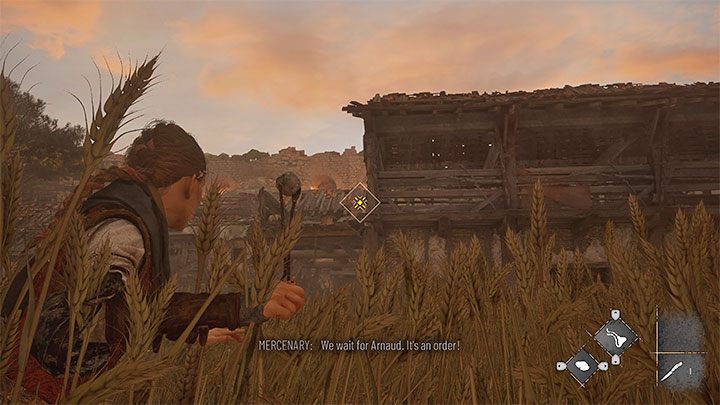 There are additional opponents in the new location - hide in tall grass to avoid them. You can also choose to sneak through buildings on left and right.

Among the group, there is an archer here - best to deal with him first, as he has an overlooking position. 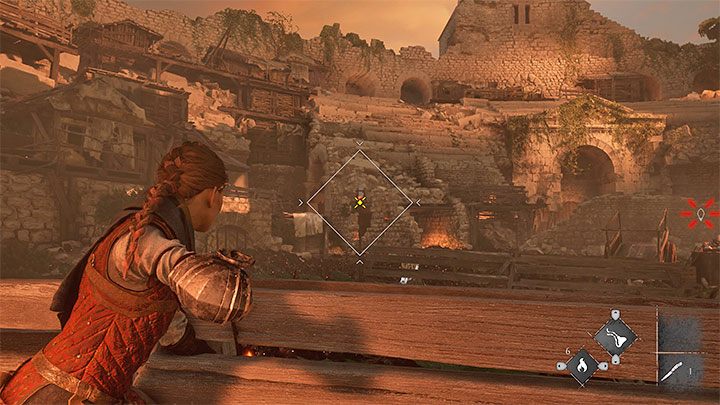 You can decide to leave the rest of the opponents be or deal with them (aside from those with headgear).

At some point, rats will appear at the scene. Use Ignifer or sticks to light braziers and torches to create safe zones. You can also craft Ignifer pots to clear the path from rats as you pass. 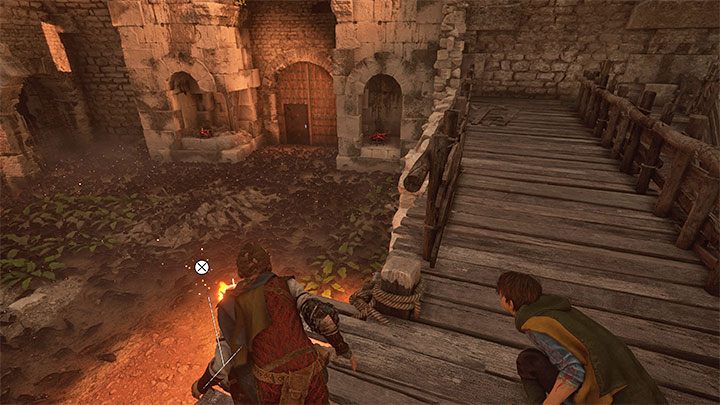 Your destination is the gate under the tower shown in the picture above - it is located at the opposite end of the area.

Use Ignifer to create new safe zones and clear the path to the gate.

Put the symbols in the correct order 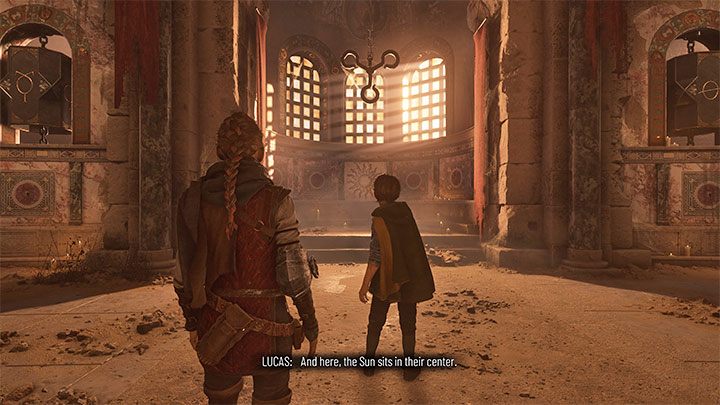 A puzzle with symbols appears here - your task is to rotate the bells to create a correct combination.

Each slingshot hit rotates a bell by 90 degrees, revealing a new symbol. Continue until the right symbol appears. 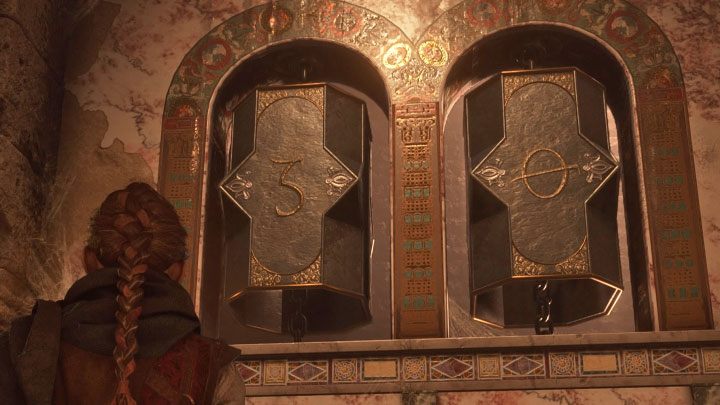 The picture above shows the correct left symbols . 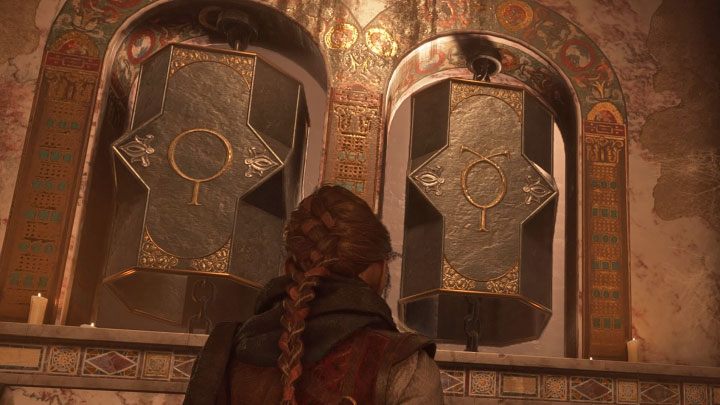 The picture above shows the correct right symbols .

If stuck, wait for Lucas to give you hints regarding the puzzle. Successful completion of the puzzle unlocks a new pathway- along the way, you'll meet Vaudin, ending Chapter 2.