The Raven's Spoils is the fifth part of the story about the de Rune children that you will get to know in A Plague Tale: Innocence. At this time, the siblings travel along with a new companion - Lucas. You will walk down a battlefield. There will be hostile British troops there, as well as hordes of rats.

The stage begins with a quiet walk along the coast. However, you will reach the battlefield soon - the remains of an English invasion. Go through the bodies and follow the road indicated by the lantern. When the rats appear, you'll have to change the route. On your left will be a fallen tree, which is next to a fireplace - light it up with Ignition. 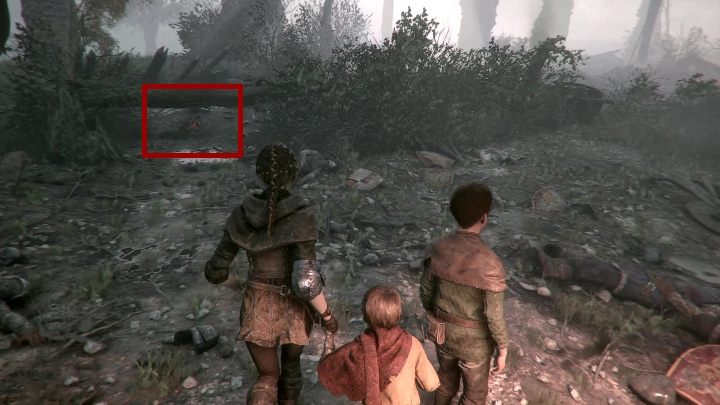 Go to the furnace and then set fire to the nearby haystack. This will allow you to return to a safe path. 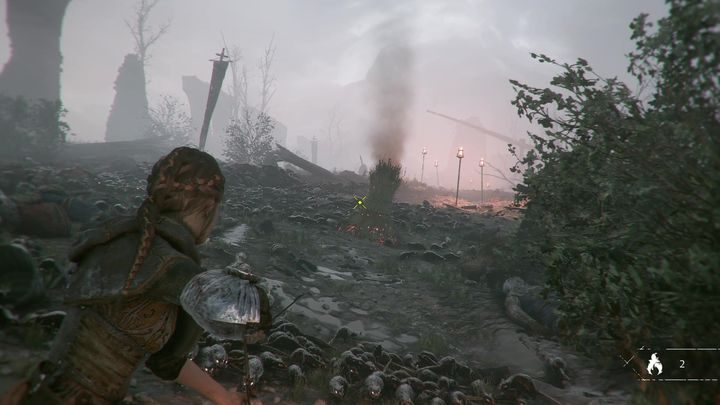 Soon, the way forward will again be cut off by rats. Head to the trebuchet and ignite a flammable fragment using the Ignifier. Then, together with Lucas, pull the rope of the trebuchet. This way you will get access to sticks. Send Hugh for one of them. 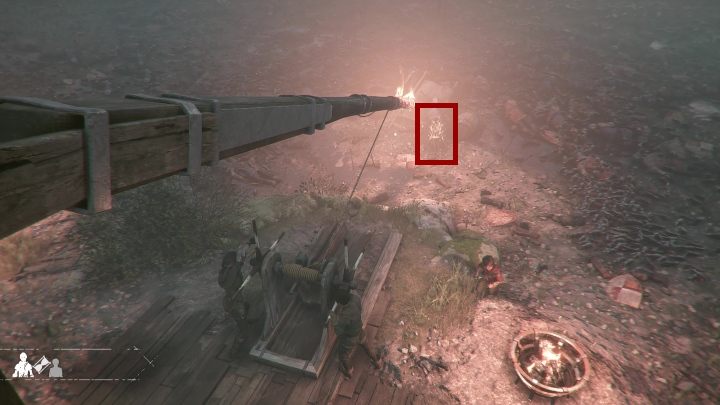 Ignite the makeshift torch using the fireplace and head to the next lamp. Immediately after arriving at it, hide in the grass. A soldier is patrolling the area. Use him to keep the rats away. Shoot a slingshot at his lights. The rats will kill him, and you will be able to continue.

After passing through the bridge, you'll arrive at a siege tower. Using the Ignifer, light up the fireplace, and then using ordinary stones, break the chain that supports the tower. Then, you can get inside. However, you must be careful. Inside is a soldier from whom you can not hide. 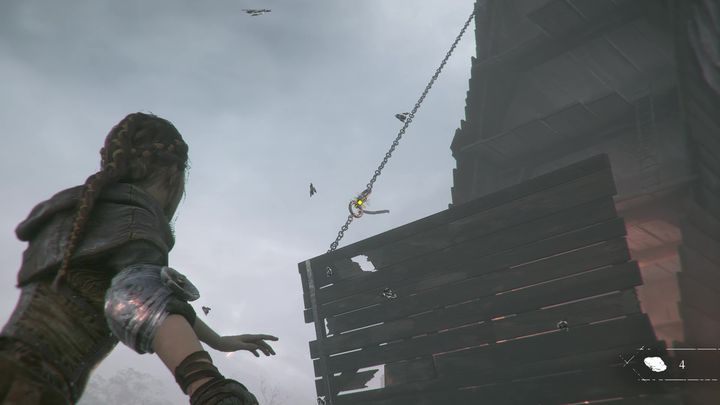 Eliminate him, take the stick lying near you and set it on fire in the fireplace. You will be able to reach a cart, which will be your light source after igniting it. You don't have to go very far. Stand so that there are sticks within the circle of light, and break the lantern of the enemy behind the barricade. 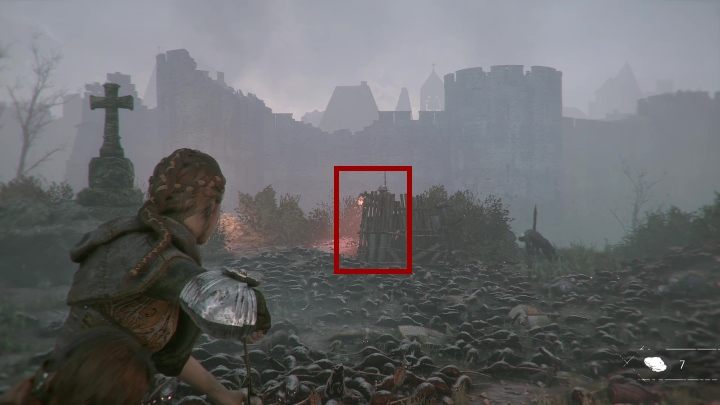 After eliminating the enemy. Light a stick in the fire in the cart and go in the direction of the cross. You will arrive at a small road. Proceed until you the street lights end. Near this place, there is a hole in the fence, which is guarded. You need a torch to be able to proceed. You can obtain it by sneaking behind the soldier, who's patrolling the perimeter. That way, you won't be killed by rats. This is one of the few moments of the game where you have to become separated from friends. If you don't, you may not return with a torch in time before the opponent returns. 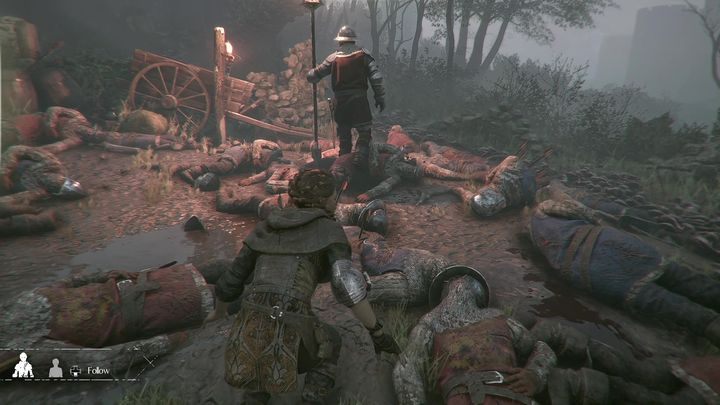 Then go further along the same path. That way, you'll reach an elevation. In this place, you have to leave the torch in the holder in order to jump higher.

Now, to go further, you have to knock down the body hanging on the tree [1] and start a fire in the furnace [2] with the use of Ignifer. This way you will be able to enter the next siege machine. 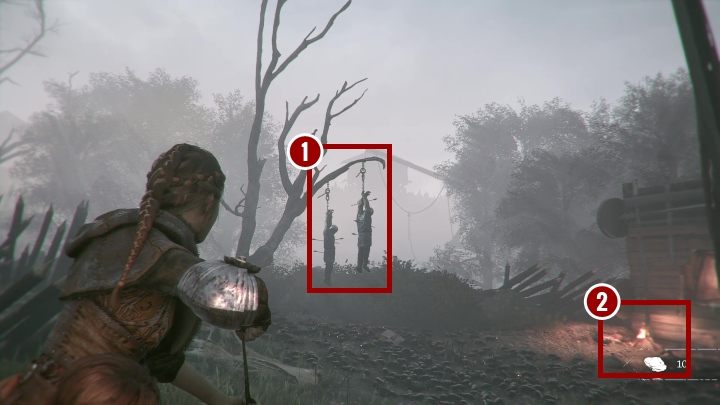 In its center is a soldier. However, he will not attack you. There is no lantern and he's in danger. You'll have to decide his fate. Take the torch and start going deep into the room. 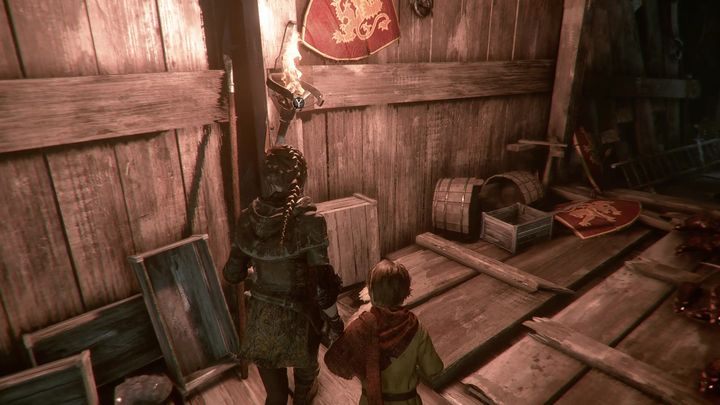 If you want to save this man, simply put the torch in the handle (halfway down the corridor) and with Ignifer light up the lantern which stands next to the man. This way, he will be standing in the light's radius and become protected.

Leaving the machine and follow the road. At some point, you will encounter a soldier who blocks your passage. At this point, Lucas will teach you how to do Somnum. Creating this potion will allow you to sneak up on the enemy and put him to sleep. 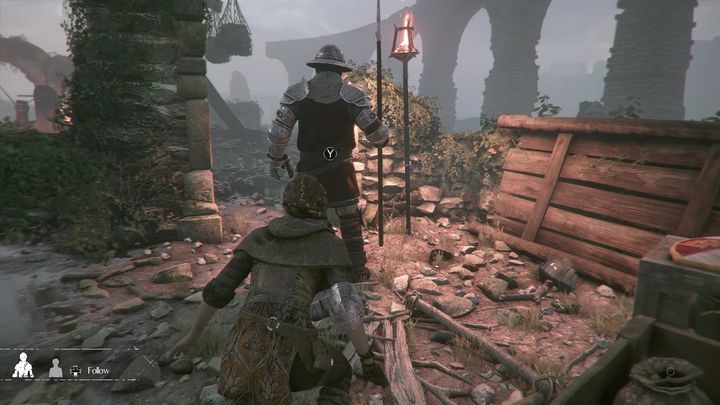 After you cope with the opponent, light a lantern and approach the burning trebuchet. To go further (through the stone arch) you will need a stick for an improvised torch. To do this, order Lucas to prepare a shot on the trebuchet. After the shot, he will begin to move in a swinging motion. This will allow you to get to the top of the stairs that lie before you. 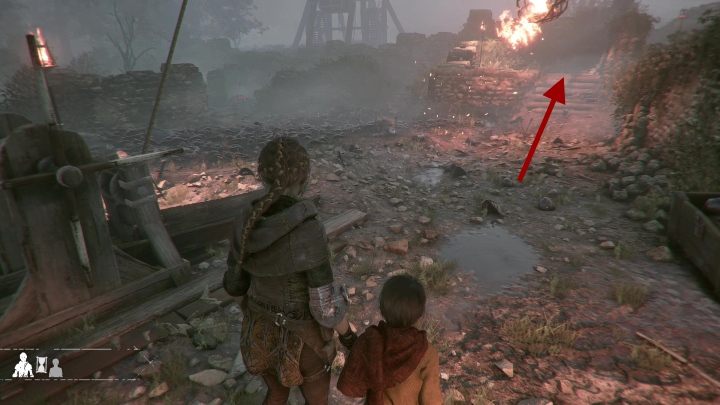 Being on top, ignite the lantern on the other side of the fence [1], and then let Hugo go through a small hole [2]. Thanks to this, you will get the necessary stick. 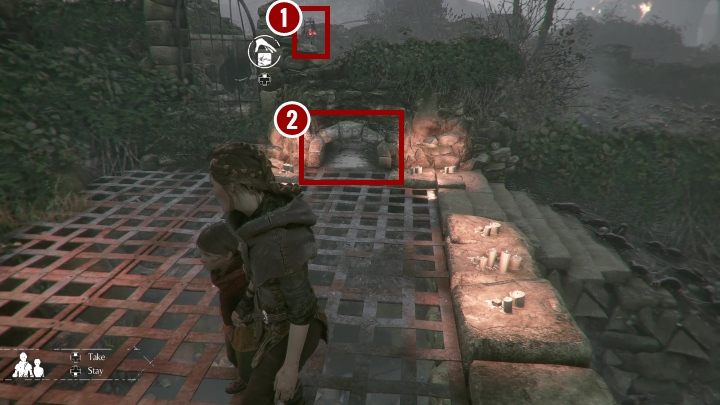 To return, order Lucas to use the trebuchet again. Then ignite the stick from the furnace and go through the arch in the direction of the lantern.

Again, move along the light sources until you get to the furnace on the workbench. Ignite the haystack with Ignifier and run into the cart. Then use a slingshot to break the chain that is attached to the cart. Move after it, so as not to go out of the light radius. 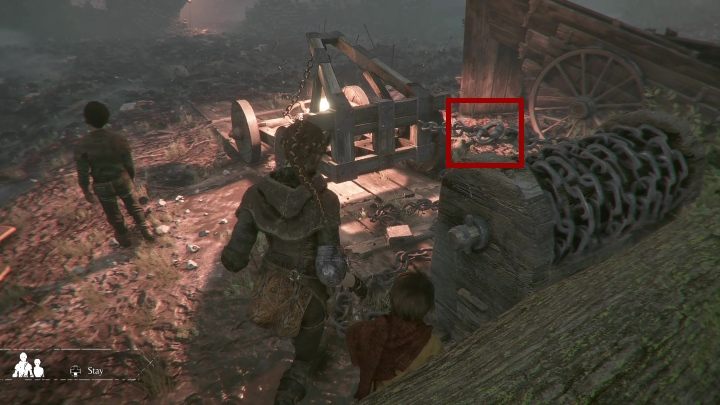 Move under the aqueduct. Break the soldier's lamp [1], break the chain that holds the remains of the structure [2] and set fire to the lantern that is behind you [3]. Next, to the lamp, you will find a stick. It will allow you to safely pass the cleared area. 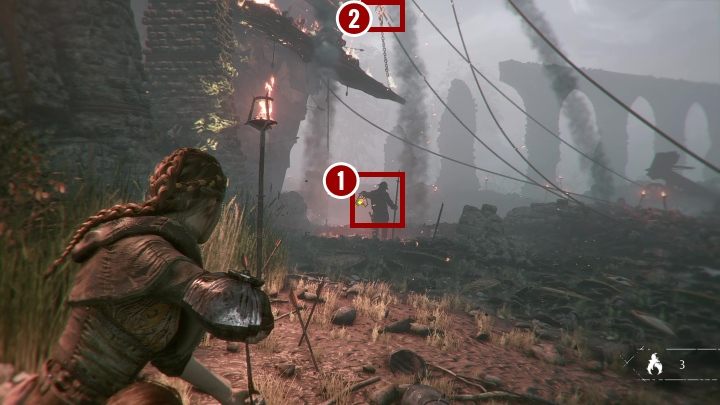 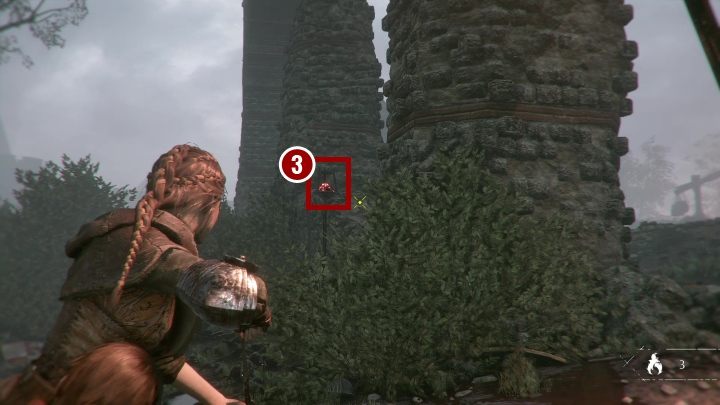 In the end, climb up and follow the path. After some time you will encounter an enemy unit. There is a soldier standing in the way. Confuse him by throwing a stone at armor container. This will allow you to pass through. 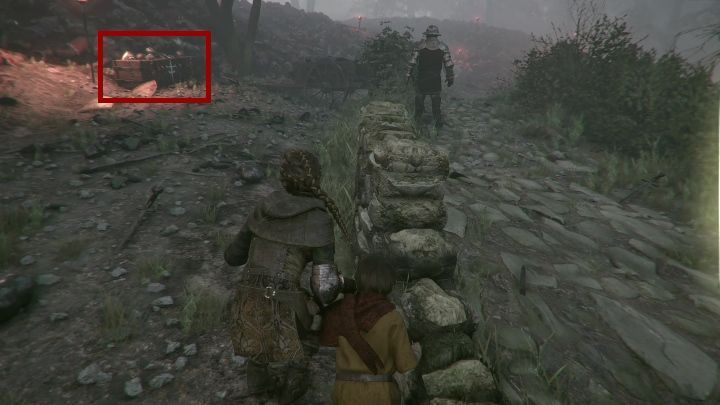 After you get to the last section of this chapter, you have to just move along the path until you meet Melie and Arthur.