This Xbox Series X guide page lists the technical specification of the device and shows the appearance of Microsoft's new console.

Microsoft, in opposition to its main competitor (Sony) has talked more freely about its console from the beginning. Thanks to that, we had been acquainted with the details regarding the hardware of the new Xbox Series X console, as well as applied technologies and exact technical specifications. 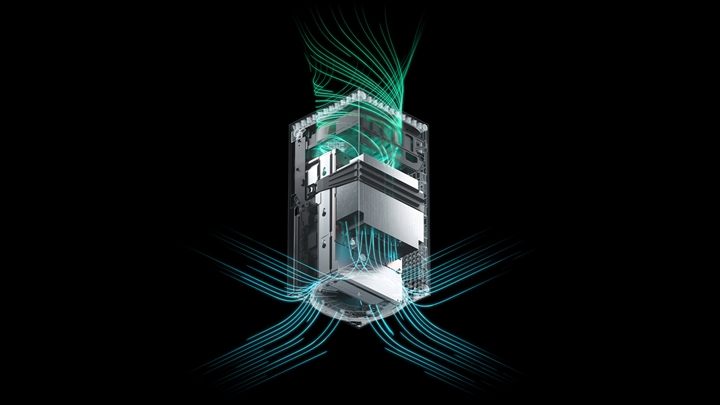 Technical specification of the console

What's more, the console also has no problem with 4K or even 8K resolution. The upside of the new console is also the support of the so-called. primitive shaders. The Xbox Velocity architecture gives you really big capabilities in terms of speed and performance. The developers also paid particular attention to a very fast SSD. Three air channels distribute the temperature generated by the equipment evenly-the console is quiet and there are no heating problems.

Xbox Series X was designed in such a way so its discrete and minimalistic, and work well with any interior. The shape of Xbox Series X resemble that of a rectangle - the console is placed vertically by default, same as its immediate rival, PS5. It should be mentioned that the new Xbox Series X doesn't have to be placed vertically all the time - of course, you can place it horizontally e.g. in a shelf under the TV. In opposition to Sony, Microsoft has decided upon black to be the colour of the console - as a result, new Xbox is completely black. 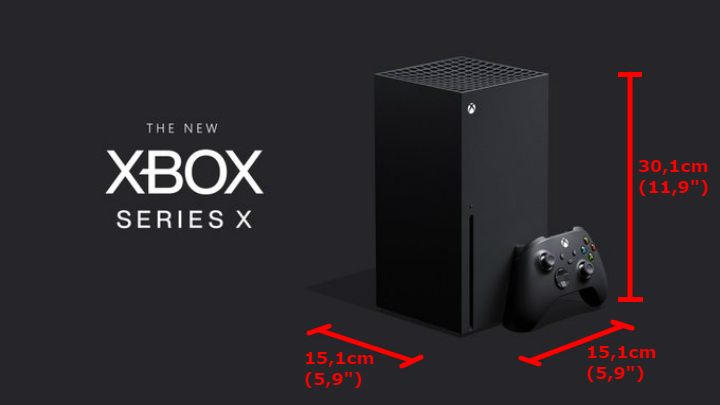 The dimensions of the new Microsoft console are 15,1 cm x 15,1cm x 30,1cm, so Xbox Series X has two-times more height than width or length. On Twitter, Microsoft has funnily compared its console to a refrigerator, which was of course a response to snide remarks of many users. The new rectangle shape of Xbox Series X is supposed to offer better air flow inside the console, lowering its potency for overheating and allowing to harness much more power from the console.

By default, each Xbox Series X console will have a 1TB SSD drive working based on NVMe, which will enable it to send data faster than in normal drives. The memory of the new Xbox Series X can be extended without interfering in the console's internal structure or replacing the installed drive. 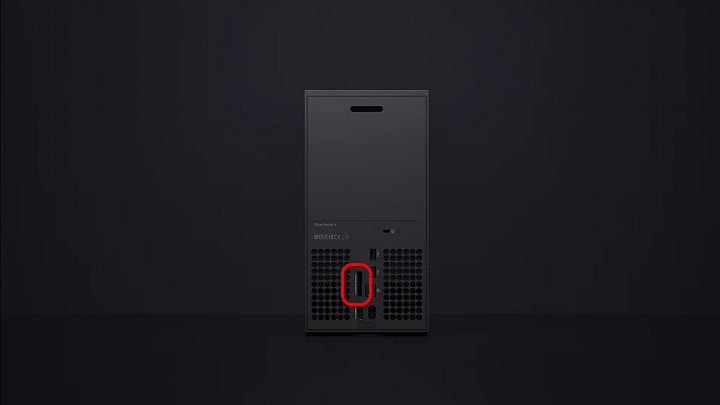 The screenshot above shows a dedicated slot for an additional SSD drive, which can extend the default amount of memory in Xbox Series X. During the time this guide was written (August 2020) only thing that we knew about external SSD drives was that they will be offered only in one version - possibly, also 1TB.

The built-in 1TB SSD NVMe drive will offer game load times that are five-times more faster than in case of Xbox One X and much more fluent gameplay.

One of the completely new features of Xbox Series X is Quick Resume, which is a type of multitasking which will allow the player to start a few games at the same time, and then switch between them without loading screens or simply restoring the state in which the game was in, without any additional loading screens! Following the fact that the current state of the game is saved on the SSD drive, you can safely turn off the console even for a few days without the possibility of losing suspended game states.

Thanks to Smart Delivery, you only need to buy one copy of the game to have access to it on all platforms (Microsoft consoles) as well as on PC. For example, if you have a Xbox One copy of the game, it will work on Xbox Series X, without having to pay for the same game. Microsoft will offer this feature in every released title, beginning with Halo Infinite.