On this page of the guide you will find everything you need to complete 100% of 12 Minutes. It contains the full walkthrough with all endings and ways of getting to them, as well as description of achievements that you may miss during gameplay. If you didn't find answers to your questions on the previous pages of the guide, read the full walkthrough here. The following content contains numerous spoilers. 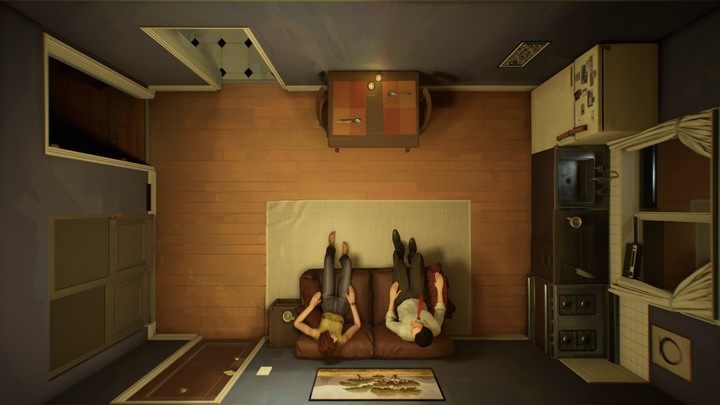 To get the first ending, don't press any key after entering the apartment, simply watch what's happening on screen. Finally, after about 10 minutes, the couple will leave the apartment, and you will return to the menu - the game will restart. This ending is only available at the beginning of the game, it can not be done in any subsequent loop. 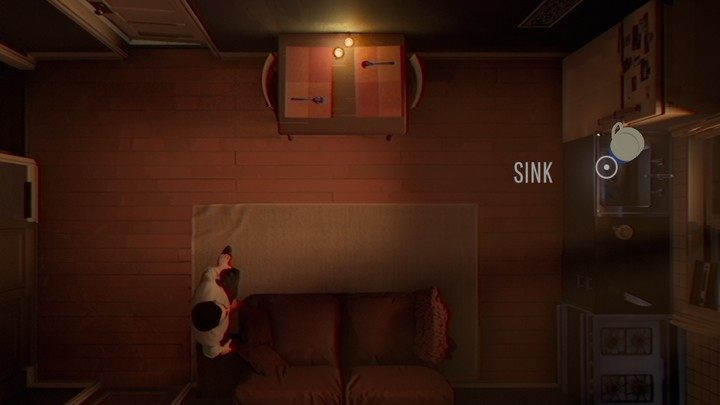 Right at the very beginning of the game, start by catching the fake police officer who is about to break into your apartment. To do this, put your wife to sleep by filling a cup with tap water and adding sleeping pills from the cabinet in the bathroom to it. Put the cup next to the couch on the cabinet. You need to do this quickly before the wife decides she's no longer thirsty. 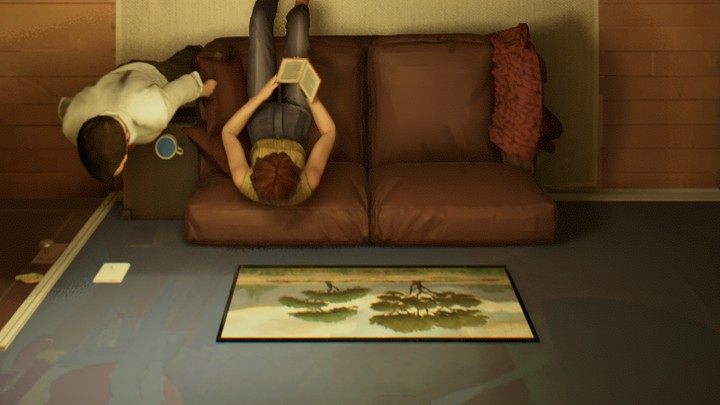 As mentioned earlier, in the meantime, water the flower in the bedroom using water from the second cup and examine the 3 paintings: the tree and the egg in the kitchen and the couple on the balcony in the bedroom. 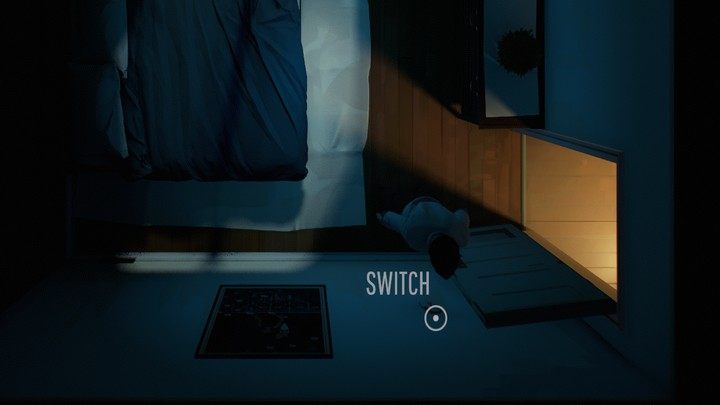 Turn the light in the bedroom on and off, once. If this is your first loop, lie down in bed; the doorbell will wake you up. 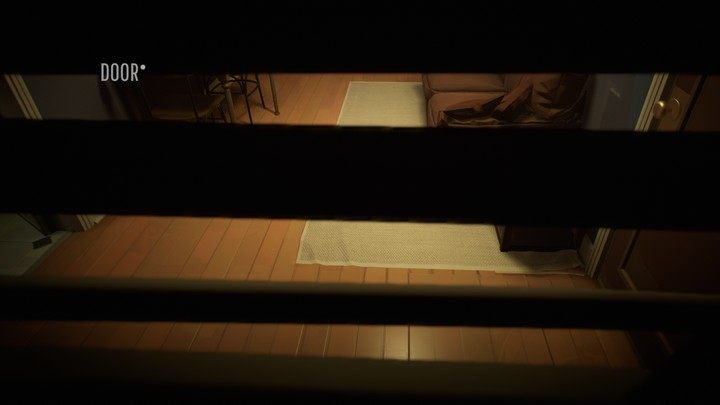 Now just hide in closet and close the door behind you. Wait till you hear the man fall in the bedroom. 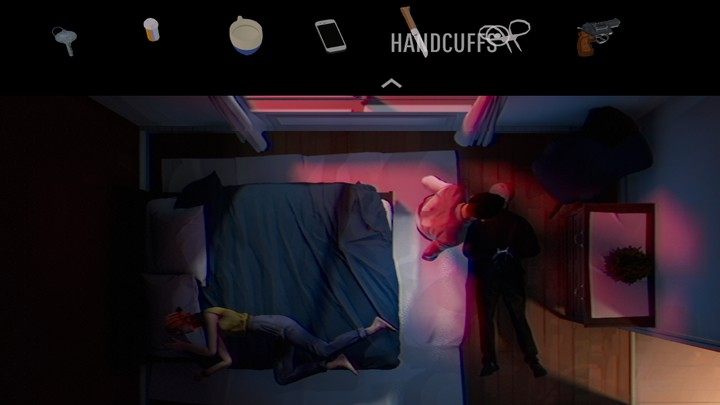 Cuff him, shoot him in the shoulder, check his phone calls. You can now begin your interrogation. Ask him all about the wife - the questions you have already asked will be marked in grey. Don't say you're innocent and don't ask him about his daughter until you've gone through all questions about the wife. When you're done, you can leave the apartment to proceed to the next loop. 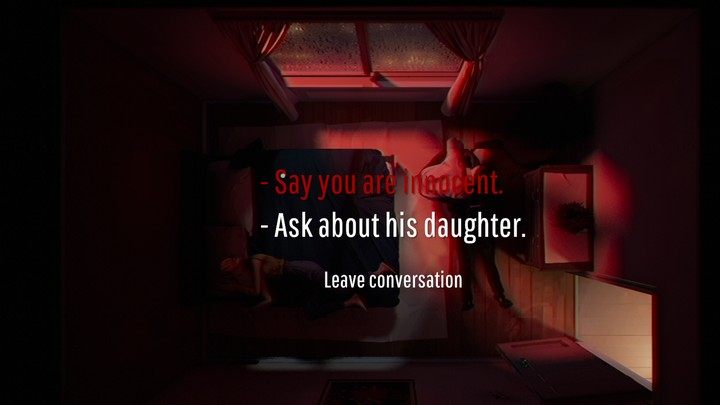 Do everything that you did before (switch the light in the bedroom and put your wife to sleep), but don't shoot the police officer during the interrogation. Get the pocket watch from the bathroom (ventilation shaft under the cabinet, you will open it with the key to the house - the bathroom door need to be closed), and the cell phone from the closet in the living room, from the jacket. When the cop wakes up, say that you're innocent and cooperate with him by following his commands:

Doing this ending is important so that you know that the man is going to kill the wife. It will change his actions later, when you will want to prove to him that he's wrong. 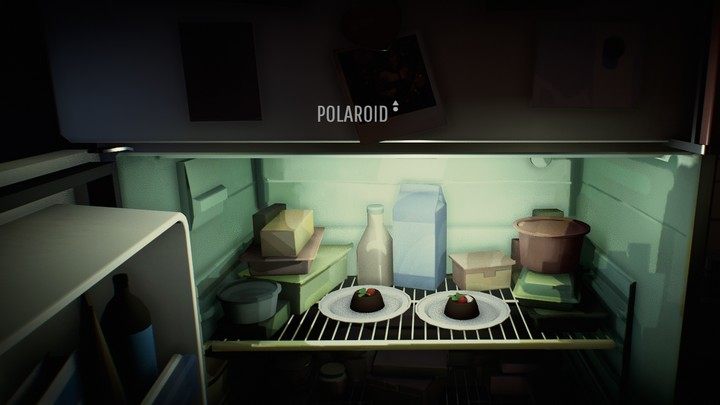 Photo on the fridge 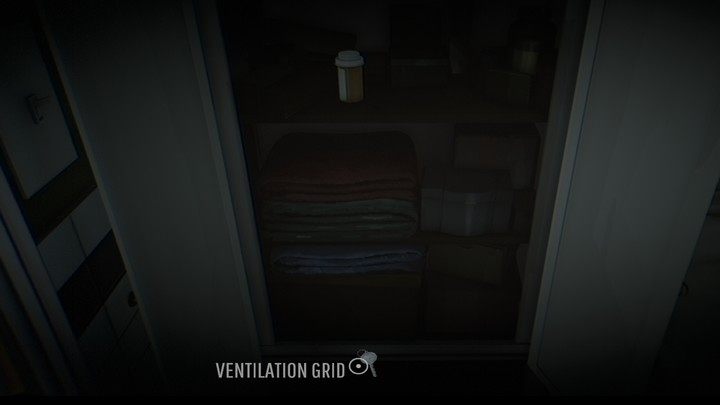 Ventilation shaft under the cabinet

Once you've questioned the officer, you can move on to questioning the wife. First, however, collect the necessary items: open the fridge to take the Polaroid photo. Take the pocket watch from the ventilation shaft under the cabinet in the bathroom; open it with the apartment keys (make sure the bathroom door is closed). 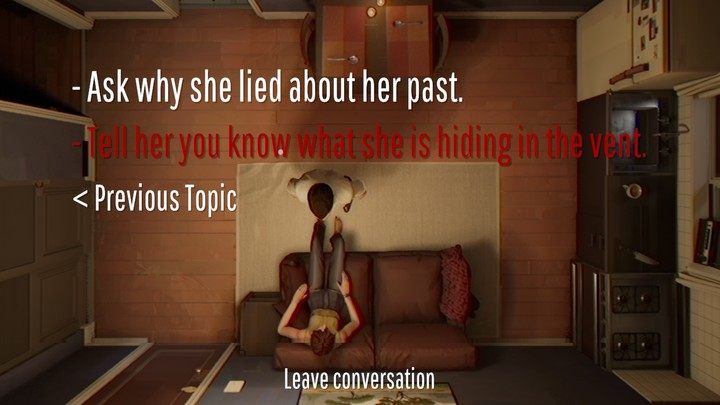 Approach your wife. Ask her about the past and select option 2: you know what she hid in the shaft. When he asks you for proof, choose the watch from the inventory. You probably won't know everything before the cop comes, so you'll have to repeat this loop 2-3 times to find out the whole truth before you go any further. Tell her about the cop and his connection to her father, and ask all questions, including the ones about the nanny and the half-brother. You need to prove to the wife that she is not guilty - the photo from the fridge and the fact that she has a brother will lead you to it. 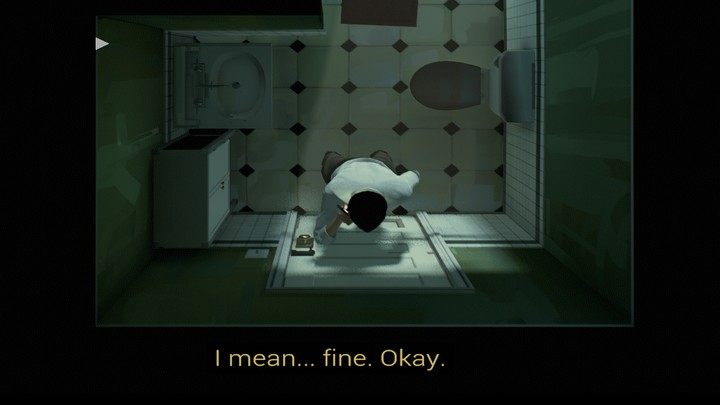 To verify that the statement is correct, you should call Bumblebee and ask for help ("the wife is innocent"). If she agrees, you may proceed.

Second interrogation of the policeman 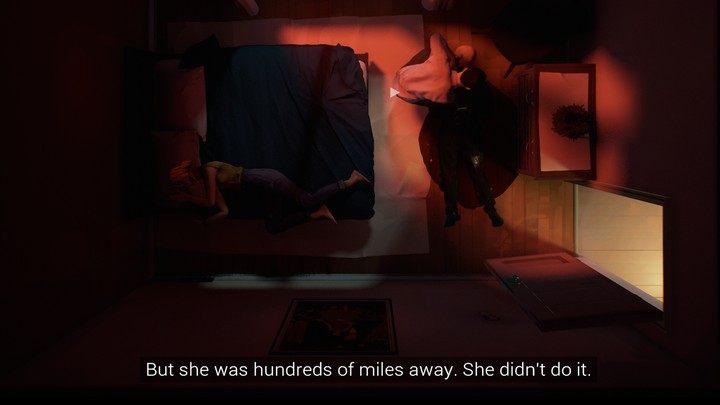 Once you've had a full conversation with your wife and you've learned everything from the police officer, you'll have to trap him again and shoot him. You will now confront the information you got from the police officer with the ones from the wife, and you'll use them in the next loop. Have the watch and photo with you as evidence, show them to him by dragging them from the inventory.

If you asked all questions the first time, you can skip this part and not interrogate him again.

The last stage of the "introduction" to getting the whole picture is to have the wife and the officer meet in such a way that no one is hurt and additional information is revealed. Take the phone from the closet (in the pocket of a jacket) and call Bumblebee behind closed doors. Bumblebee will only agree to help if you have the full information from your wife and the police officer.. 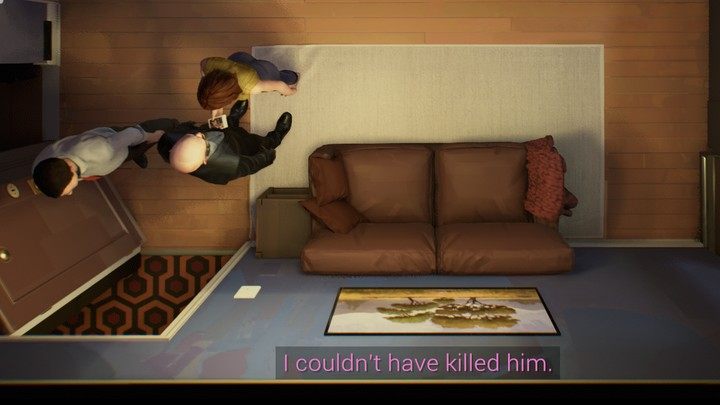 Talk to your wife, giving her the Polaroid photo - you'll get to the bottom of it by explaining her innocence. Now just wait for the policeman - you can tell her that you suggest to wait for the police officer to make time pass faster. When he enters the apartment, the wife will start talking to him. However, if the police officer does not want to listen to you and is aggressive, you don't have all the information, or you didn't see the wife's death (ending 2). You'll have all the information after the dialogue; you can move on. 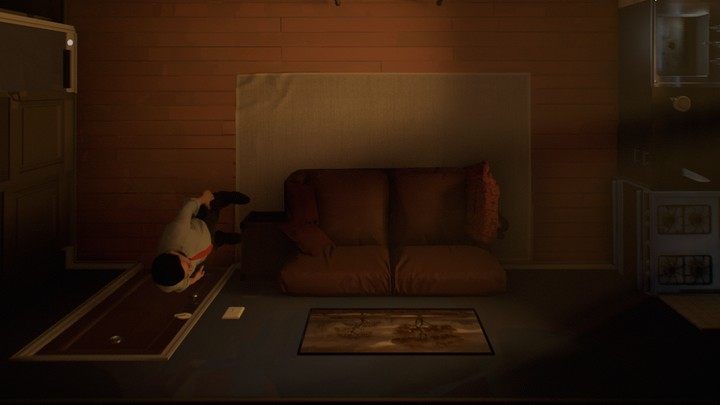 After performing the actions above, talking to the policeman and learning about the brother, phase 2will begin - now you can get achievements related to the phases overlapping (paintings and flower in the bedroom). 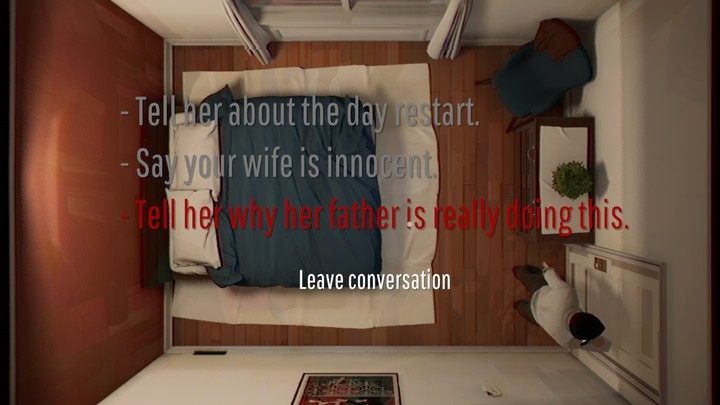 Once you talk to the officer and he leaves the apartment peacefully (see the section The policeman's confession above), you will unlock a new dialog option in the conversation with Bumblebee, where you can explain to her why her father is doing this. By making this call, you can unlock the ending and achievement Groundhog. It doesn't end on the phone... 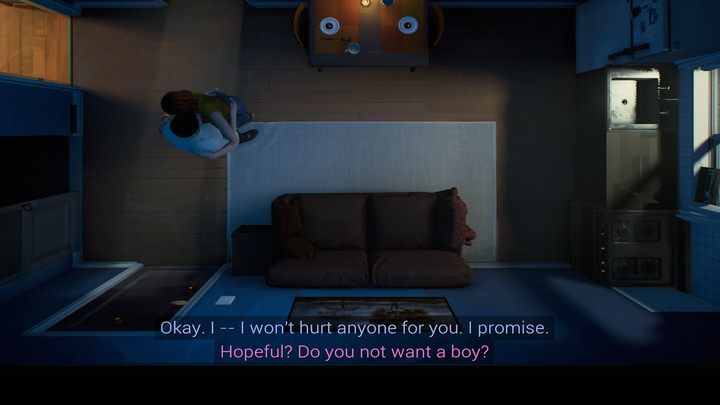 In addition, you have to be nice to your wife and conduct the whole dinner correctly: help her set the table (cups, plates), listen to what she has to say over the dessert. When opening the gift, select the positive response, where the character is happy about the baby. At the end, agree to dance until the end of the scene. 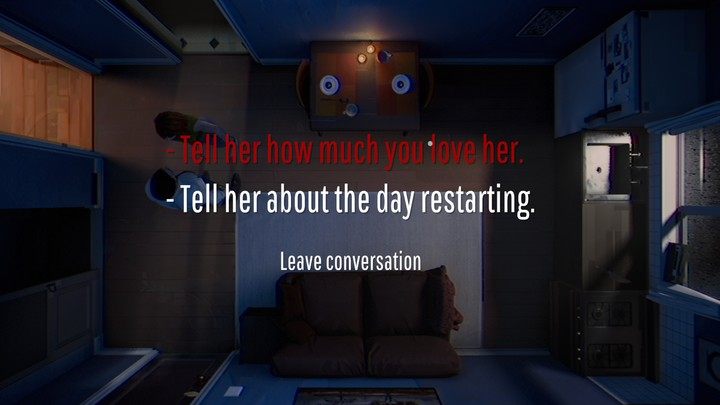 Don't forget to say at the end that you love her.

Third interrogation of the policeman

Once again interrogate and then put your wife to sleep and take care of the policeman. You need to question him about the nanny and the wife's brother who is her father's killer. Ask about him and the name of the nanny. 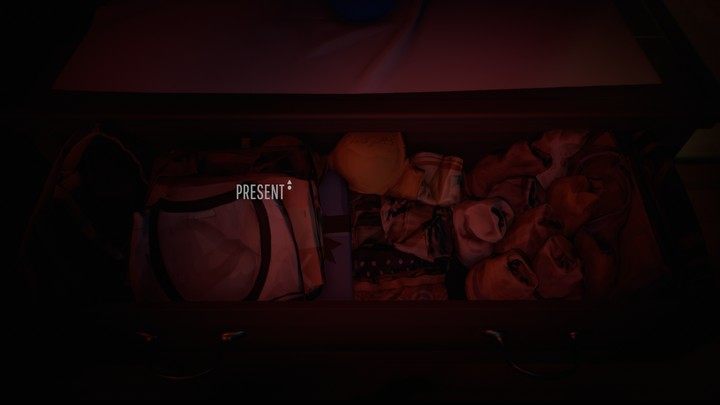 Show the baby's clothes taken from the dresser (the gift) to the policeman. This will continue the story. 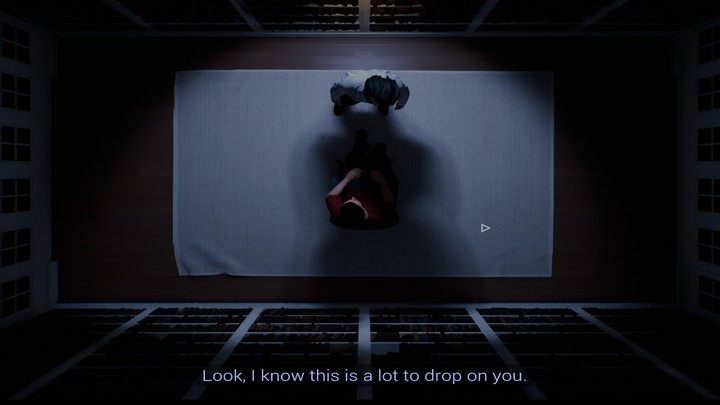 After the interrogation and learning the truth, you will be automatically moved to a different room. Your answer doesn't matter at this point. 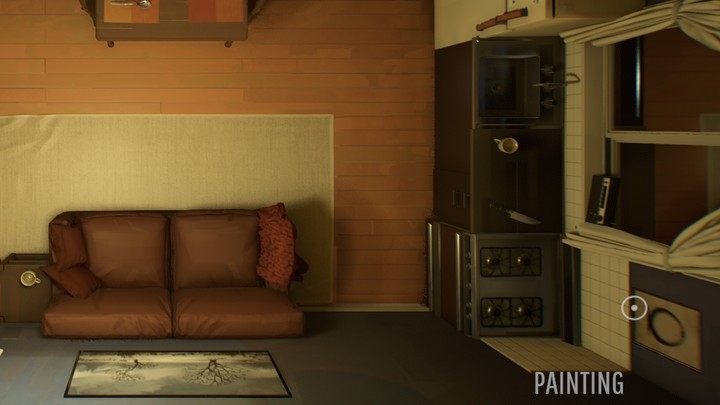 After this stage, the first change in the egg painting in the kitchen will appear. 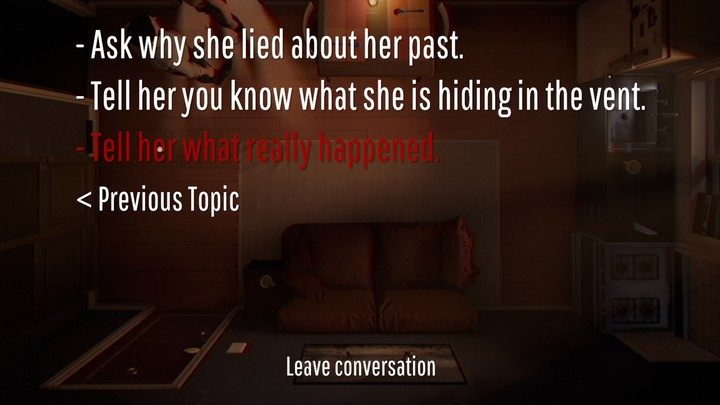 The Confession ending can be unlocked now, once you know the identity of the "brother" after questioning the policeman with new evidence. This ending is very easy, but you can't make a mistake: take the blame in every dialogue. When you start talking to your wife and ask about the past, a new dialog option will be available: "Tell her what really happened". This dialogue leads to the Confession ending. In your next answers, say that you killed her father and that it was all your fault. It should also be added that you'll plead guilty in front of the police officer.. 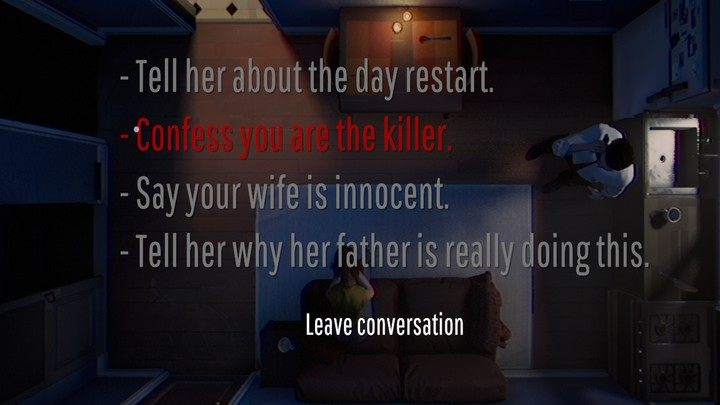 Then go get the pocket watch from the bathroom and call Bumblebee. Here you will also see a new dialogue option: Admit you're the killer. Now you just need to wait or go to bed, so that time will pass faster. In the end, confess everything in front of the policeman by choosing new dialogue options, always taking the blame. Give him the watch and leave the apartment. 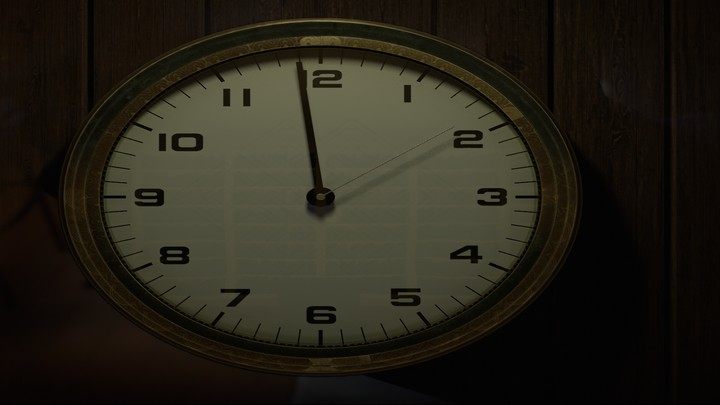 Watch out, because the time on the clock will now go backwards! For now, though, you don't want to know what happens when the clock hand goes back two minutes - this leads to a different ending, which you will read about in a moment. 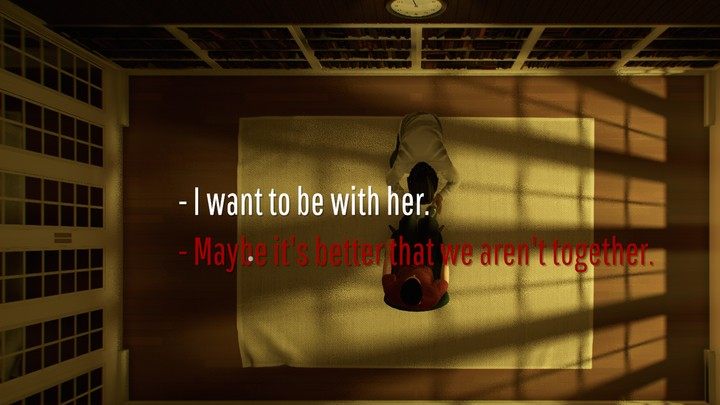 The Alone ending is easy and short. Go get the watch from the bathroom and wait for the clock hands to go back two minutes from the full hour. You will now find yourself in a small room - you have two dialogue options to choose from. Choose the second: maybe it's better that we're not together. You will get back into the loop, but with some strong restrictions - however, you can still unlock two endings... After that you will see the end credits - but you'll still have access to further endings.

In this ending, follow the same steps as before. The only thing that changes is the dialogue with the man in the room - choose the option I want to be with her and later she doesn't need to know anything.. 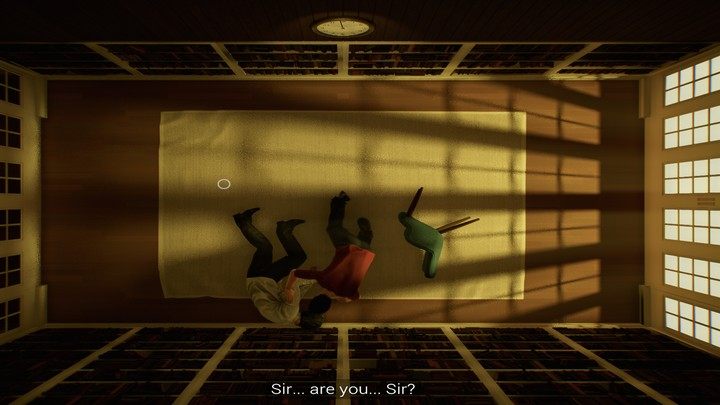 This will lead to the scene in which the wife's father dies.

This way, the game will "end" again, but later, you will return to your apartment in its previous state. If you checked the egg painting in the kitchen above the stove previously, you'll see that it's now in its third phase, where instead of the egg there's a snake eating its own tail - checking the painting will unlock the Ouroboros achievement. To get this achievement, you must previously pass the Alone ending.

In the Mindfulness ending you're alone in the apartment. The only object you can interact with is the watch from the bathroom. As mentioned earlier, this ending is only available if you asked your wife about the book 2 times, and in the next loop you said the sentence from the book to her (again asking about the book).

If you want to change the order of endings, the game progress will be definitively reset after this one and you'll need to start the game over. Make sure you pass both the Alone and Continue endings and get the painting achievements, if you care about them. 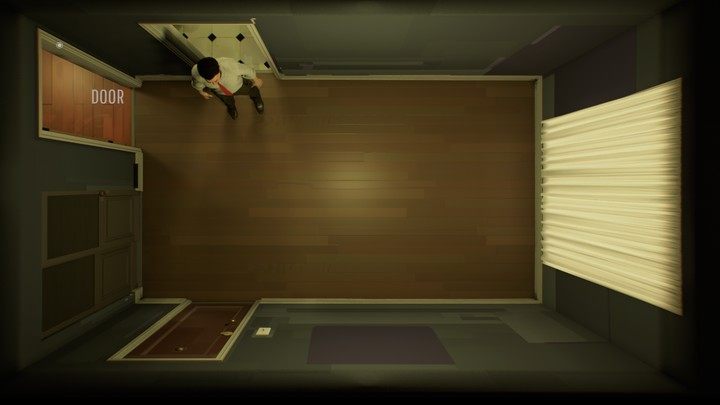 Pick the watch up and manually set the pointer to two minutes before twelve. Wait for the second hand to reach 12. 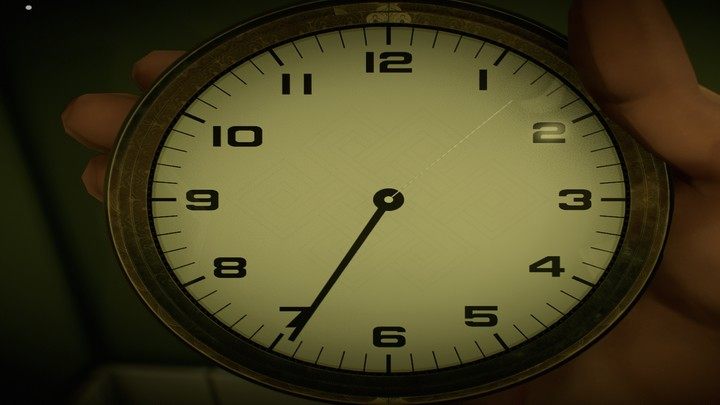 You will be back in the room with your wife's father. This ending is a bit difficult to do, because instead of dialogue options, you need to click objects from the environment. 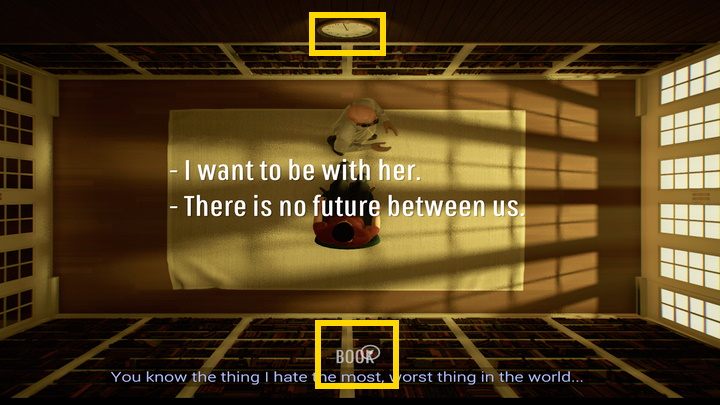 First, click on the book below the main character, the red one, the same as the one your wife read. Then click on the clock on the wall, above the place where the character sits. When you click the clock, you still have to wait until it strikes 12. Do not click any dialogue options. This is followed by a definitive ending and double ending credits.

This site is not associated with and/or endorsed by the Annapurna Interactive or Luis Antonio. All logos and images are copyrighted by their respective owners.